China's Air Force Is Massively...As In Massively Flawed for One Reason 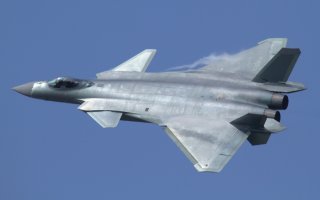 Here's What You Need To Remember: China’s aircraft industry continues to struggle to get the WS-15 jet engine to a mass-producible state. In prior years, reports emerged that the WS-15’s single-crystal turbine blade are plagued by reliability and performance issues.

China is moving away from the use of Russia’s AL-31F engines on future J-20 stealth fighters, opting instead for a domestically-produced alternative.

“It’s impossible for China to rely on the Russian engine because Russia asked China to purchase more Su-35 fighter jets in exchange for the AL-31F engine deals,” an insider source told the Morning Post.

China’s People’s Liberation Army Air Force was the first foreign customer to import the Su-35, one of Russia’s most advanced air superiority fighters, in a 2015 contract for the procurement of twenty-four units. But the PLAAF is reportedly no longer interested in acquiring additional Su-35’s, with Morning Post’s source alleging that China’s domestic aircraft industry has attained similar, if not superior, capabilities with the J-16  strike fighter: “The key problem is – except for its longer combat range advantage – the radar, navigation system and other electronic components on the Su-35s are inferior to Chinese aircraft like the J-16 strike fighter.”

With Beijing and Moscow at an impasse over further AL-31F sales, the PLAAF is turning to the WS-10C, an advanced version of the older Shenyang WS-10 turbofan engine. The insider source confirmed to the Morning Post that future J-20 models will ship with the WS-10C, which they maintain to be similar in performance to the AL-31F.

As the source acknowledges, both the AL-31F and WS-10C are stopgap solutions. The J-20 was supposed to enter mass production with the new WS-15 engine, but the fighter was rushed into service with the AL-31F amid a sharp downturn in US-Chinese relations during the Trump Presidency. The WS-15, which was in development since 2005, will enable the J-20 to supercruise-- that is, to sustain supersonic flight without the use of afterburners. Chinese industry insiders signaled optimism in 2018 that the WS-15 is on the cusp of certification, but those hopes have not been borne out.

Nevertheless, China’s aircraft industry continues to struggle to get the WS-15 to a mass-producible state. In prior years, reports emerged that the WS-15’s single-crystal turbine blades are plagued by reliability and performance issues. In 2015, a WS-15 engine exploded during testing.

The WS-15’s design problems have yet to be solved, and PLAAF top brass is beginning to lose patience: “The use of WS-10C to replace Russian engines was caused by the failure of WS-15 to pass its final evaluation in 2019,” said the source. “The air force is not happy with the final results, demanding that engine technicians modify it until it meets all standards, for example matching the F119 engine used by the Americans’ F-22 Raptor.” The Covid-19 pandemic has further stymied what was already a tortured WS-15 development cycle, with no clear end in sight.