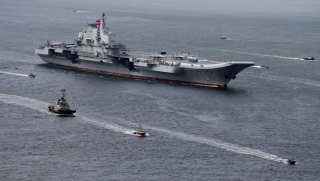 For the past few years, China has been accelerating the professionalization and modernization of its military forces, adding new aircraft and ships at an alarming volume each year. In its bid to become a global power Beijing places particular focus on its nascent aircraft carrier fleet.

So the news that the third Chinese aircraft carrier (Type 003) might be ready sooner than expected sent vibrations throughout the world.

Since the end of the Second World War, aircraft carriers, and their force projection capabilities, steadily rose as the ultimate sign of a superpower. To be sure, a well-supplied, modern nuclear arsenal is also important, but strategic nuclear weapons are designed more for deterrence, rather than actual employment, as that would signal the end of the world as we know it.

So, the more aircraft carriers a country has, the more power it can project abroad and thus the more gravity other nations assign to its words. For example, as tensions in the South China Sea and Taiwan steadily rose in October, the U.S., Australia, the U.K., and Japan conducted joint training in the area with three aircraft carriers and several other warships, sending a message to Beijing. But despite their force projection potential, not all aircraft carriers are created equal.

As the world’s preeminent superpower, the U.S. can currently field 11 nuclear aircraft carriers, the most by far in the world. The U.S. Navy and its naval aviation component alone constitute the second largest air force in the world, with the U.S. Air Force coming first and the Chinese Air Force third.

In the recent annual report on the Chinese military, the Department of Defense highlighted Beijing’s plan to create a strong aircraft carrier force that can project power abroad.

The report stated that the People’s Liberation Army-Navy will soon have the capability to conduct long-range precision strikes against land targets through submarines and surface warships using land-attack cruise missiles, which will enhance the Chinese military’s “global power projection capabilities.”

The Pentagon added that the Chinese military is also “enhancing its anti-submarine warfare (ASW) capabilities and competencies to protect the PLAN’s aircraft carriers and ballistic missile submarines.”

According to a recent report by the Center of Strategic and International Studies (CSIS), the third domestically build Chinese aircraft carrier (Type 003) will enter service much sooner than the Pentagon previously predicted.

Using a commercial satellite on the Jiangnan shipyard, the CSIS was able to monitor the progress on the Type 003 aircraft carrier. Throughout a period of about three weeks in September and October, the CSIS assessed that the shipyard workers inserted the engines and powerplants in the ship, thus completing the initial installation of all major internal components. Furthermore, work on the vessel’s catapults—the Type 003 is designed as a CATOBAR aircraft carrier—is advancing quickly.

However, the Type 003 aircraft carrier still needs to undergo several important milestones. The ship’s starboard elevators, which are designed to transfer the aircraft from the internal hangars to the flight deck, are still missing. Moreover, the ship’s island and weapon systems still need to be installed and tested.

Based on these developments, the CSIS assesses that the Type 003 aircraft carrier could be ready within three to six months. However, that doesn’t mean it will be operational in the spring of 2022 since it will still need to undergo extensive sea trials. The Pentagon predicts that China’s third and most advanced aircraft carrier will be ready by 2024.

Although the Chinese aircraft carrier fleet is far smaller than the U.S., the shipbuilding capabilities of China and the recent revelation about the Type 003 suggest that the gap might close far sooner than expected. And foreign—even Western—companies might help in that without even realizing it.