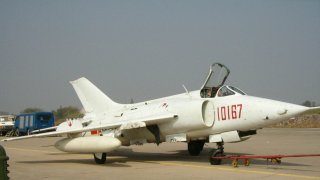 Here's What You Need To Remember: The Q-5 did not see a great deal of combat, but it did taste fire with the Sudanese air force in Darfur and with Myanmar during counterinsurgency operations. Today, more than fifty years after its first flight, the Q-5 is still flying.

Had China gone to war with America or the Soviet Union during the Cold War and after, one of its premier weapons—and one that would have dropped nuclear weapons—would have been the Nanchang Q-5 bomber.

Like most Communist bloc aircraft, its NATO code name was unflattering (“Fantan”). Its forebears were also less than auspicious: the Q-5 and its cousin, the J-6 fighter, were based on the Soviet MiG-19 (NATO code name “Farmer”), whose intensive maintenance requirements and difficult handling characteristics proved unpopular with the Soviets and many of their allies, such as North Vietnam. But strangely, China proved quite fond of the MiG-19.

Which is why the Chinese air force turned to it when it needed a new ground attack aircraft. The Q-5 (and the export version, the A-5) was born in 1955, after Communist China's bloody seizure of Yijangshan Island from Taiwan, where the Communists were able to enjoy air support for once from Soviet-made Il-10 propeller-driven attack aircraft, according to authors Yefim Gordon and Dimitry Komissarov in “Chinese Aircraft: China's Aviation Industry since 1951.” Given that most advanced military powers had transitioned from props to jets by the mid-1950s, it is no surprise that by 1958, the People's Liberation Army Air Force wanted a supersonic strike jet.

“The engineers at Nanchang believed the future aircraft's role would be CAS (close air support),” write Gordon and Komissarov. “To this end, the fighter-bomber needed good low-altitude performance and plenty of firepower, as well as some potential as a dogfighter for self-defense, good field performance and adequate range and endurance.”

From 1958 to 1962, China was convulsed by the Great Leap Forward, which set Chinese aircraft design back. The upheaval “forced many of the younger designers, some with extraordinary zeal, but lacking knowledge in aircraft design, to disobey physical laws and the necessary standards in production, testing and quality management,” writes Andreas Rupprecht in “Dragon’s Wings: Chinese Fighter and Bomber Aircraft Development.” Nonetheless, the resulting twin-engined design was bigger and heavier than the J-6 fighter, but nearly as fast at low altitude. In fact, the NATO code name “Fantan” would normally have been assigned to a Communist fighter, which Western analysts initially assumed the Q-5 was.

The Q-5 could achieve a speed of Mach 1, though with a combat radius of 250 to 370 miles, it was as short-legged as most Communist bloc fighter and strike aircraft. Typical armament for the Q-5 comprised two twenty-three-millimeter cannon, and as many as ten hardpoints for bombs and air-to-ground rockets. As with other attack aircraft such as A-4 Skyhawk, it could also carry air-to-air missiles.

China produced some 1,300 Q-5 and A-5 aircraft. The PLAAF flew them into 2017 before retirement, and perhaps even a few now are operational. The A-5 was flown by several Chinese allies, including North Korea, Pakistan, Myanmar, Sudan and Bangladesh.

How great a strike aircraft was the Q-5 compared to other 1950s designs, such as the Skyhawk, can be debated. But China managed to parlay the design into a slew of variants and upgrades. Even into the 1990s, the Q-5 received improved equipment—often purchased from Western firms—such as more reliable engines, better avionics and laser rangefinders.

One intriguing version was the abortive Q-5B torpedo bomber. By 1965, torpedo bombers hunting surface ships seemed an archaic concept straight out of the Battle of Midway rather than the modern era of guided anti-ship missiles. The radar-equipped aircraft would have carried two Yu-2 torpedoes or a three-thousand-pound bombload.

However, the most intriguing of the Q-5s were the handful modified into tactical nuclear bombers in the early 1970s (these could be identified by the all-white paint scheme to protect the aircraft from nuclear flash). The aircraft were fitted with more powerful engines, though the Q-5 proved a bit on the small side for a nuclear bomber.

“The internal weapons bay, which proved to be extremely impractical (it was simply too small) was put to good use, housing an extra fuel tank in lieu of bombs,” write Gordon and Komissarov. “This increased the Q-5 I’s internal fuel capacity by 70% over the J-6, improving range by 26 percent and combat radius by 35 percent—no small achievement.”

The Q-5 did not see a great deal of combat, but it did taste fire with the Sudanese air force in Darfur and with Myanmar during counterinsurgency operations. Today, more than fifty years after its first flight, the Q-5 is still flying.