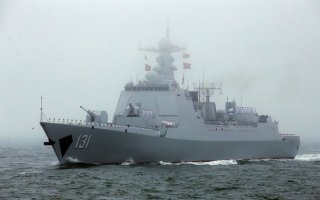 Here's What You Need to Know: China has been playing catch-up for decades and could be closing the ground with the United States and its allies.

Earlier this year there were reports that China’s People’s Liberation Army Navy (PLAN) was going “all-in” on aircraft carriers, but now the new threat could be the PLAN’s attempts to double the size of its destroyer fleet.

There is no denying that China’s PLAN has been modernizing for the past twenty-five years, and it has transformed from barely being a “green water” navy to a true “blue water” navy, which can operate in more-distant waters including the Western Pacific, the Indian Ocean and even in the waters near Europe.

At the same time, it has taken the first step towards building a global network of naval bases by expanding its PLAN facilities in Djibouti, located at the “Horn of Africa.”

This week The Diplomat reported that as of mid-2020, the PLAN currently fields twenty modern Aegis-type destroyers, which are supported by eleven older (non-Aegis-type) destroyers. Of those twenty newer warships, eighteen were commissioned only within the past seven years.

This includes one lead Type 055, a new class of stealth-guided missile destroyers that feature a multi-mission design and are equipped with a combination of sensors and weapons that can allow it to be used in area air defense and anti-submarine warfare (ASW). Navy Recognition reported that the future variants of the Type 055 destroyers could be armed with such advanced weapons as lasers or electromagnetic railguns.

The Type 055 resembles some elements of the U.S. Navy’s own stealthy USS Zumwalt, and is capable of launching land-attack missiles. Beijing’s plan for the PLAN is to have a fleet of eight of the Type 055 destroyers—with five built or under construction and three more planned to be built in the near future. The first Type 055, the Nanchang, was launched in January 2020.

Moreover, while Beijing has classified the Type 055 as destroyers, a U.S. Defense Intelligence Agency 2019 report on Chinese military strength actually described them as guided missile cruisers, and as past reporting from The National Interest has noted at ten thousand to twelve thousand tons, and 590 feet long, these are actually slightly bigger than American Ticonderoga-class cruisers.

The destroyers (or cruisers as the case may be) could be part of the PLAN strategy to have naval dominance by 2030 and naval superiority by 2049. However, as has been noted in the past, such efforts will cost a great deal of money and China would still need to have more warships than the United States as well as America’s partners around the world including the UK, Australia and even India.

As Forbes.com also reported this week, the Japanese Maritime Self-Defense Force—which is technically still a serious naval force—could be looking at submarines to counter any Chinese threat. In other words, Beijing could be doubled down on destroyers, just as it has appeared to go all-in on carriers, but building them is only half the process. Those vessels will need to be maintained and kept up to date with the latest hardware.

China has been playing catch-up for decades and could be closing the ground with the United States and its allies, but an expensive effort to build a powerful “blue water” navy is just another expense for a nation that could be stretched thin in many directions.