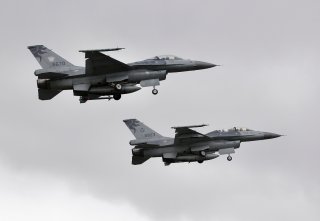 Here’s What You Need to Remember: The People’s Liberation Army Navy has deployed its aircraft carrier Liaoning near Taiwan’s coastal waters while Taiwan’s Defense Ministry has reported multiple incursions by China’s Air Force, the latest in Beijing’s increasingly bold pattern of encroachment into Taiwanese airspace.

The Chinese Communist Party made it crystal clear that it sees Taiwan as a breakaway province that will be returned to mainland control, by force if necessary. This despite the fact that Taiwan has been governed independently since before the party’s current general secretary and president of the People’s Republic of China Xi Jinping was even born.

Beijing has claimed that Taiwan is bound by an understanding known as the 1992 Consensus, which was reached between the representatives of the CCP and the Kuomintang—Taiwan’s ruling party at the time. At issue is the fact that the two sides don’t agree on the content of the consensus as it wasn’t ever intended to fully address the question of the island’s legal status. The People’s Republic of China has maintained that the two sides of the strait belong to a single China that would work together to seek national reunification. Taipei has seen it differently, and that the Republic of China (Taiwan) would stand as the “one China.”

This week the rhetoric on the matter reached a fever pitch when Beijing warned the United States to stop “playing with fire” after President Joe Biden’s administration weighed in on the issue of Taiwan.

On Monday, Chinese foreign ministry spokesperson Zhao Lijian responded to Biden’s calls to South Korean president Moon Jae-in to take a strong stance on China’s activity toward Taiwan. While South Korea is an important trading partner with China, which is also a key in dealing with the North Korean government, Moon did address the issue.

“We’ve shared the view that peace and stability in the Taiwan Strait is extremely important, and we agreed to work together on that matter while considering special characteristics in relations between China and Taiwan,” Moon said.

Biden and Moon also issued a joint statement that mentioned Taiwan, which noted “We pledge to maintain peace and stability, lawful unimpeded commerce, and respect for international law, including freedom of navigation and overflight in the South China Sea and beyond. Biden and Moon emphasize the importance of preserving peace and stability in the Taiwan Strait. As democracies that value pluralism and individual liberty, we share our intent to promote human rights and rule of law issues, both at home and abroad.”

The statement was met with a swift and direct response from the Chinese Foreign Ministry.

“We noted the relevant content of the joint statement of the U.S. and the R.O.K. and are concerned about that. We believe that the development of U.S.-R.O.K. relations should be conducive to promoting regional peace, stability, development and prosperity, rather than the opposite, still less harmful to the interests of third parties including China,” Zhao said during Monday’s press conference Reuters reported.

“The joint statement mentioned issues related to Taiwan and the South China Sea,” Zhao added. “The Taiwan question is China’s internal affair. It bears on China’s sovereignty and territorial integrity and allows no interference by external forces. We urge relevant countries to speak and act prudentially on the Taiwan question and refrain from playing with fire.”