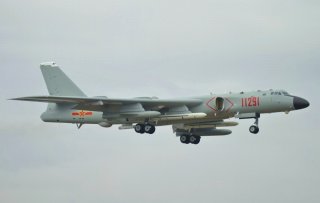 Here's What You need To Remember: Taiwan's military plans to hide troops, vehicles and warplanes inside caves and tunnels during the opening phases of any Chinese assault on the island country. H-6Ks dropping powerful thermobaric or fuel-air explosives could threaten those underground hideouts.

The bomb -- apparently China's most powerful non-nuclear munition -- could help Chinese forces to bombard cave or tunnel complexes or flatten forests in preparation for an airborne assault.

A promotional video that the China North Industries Group Corporation released in December 2018 depicts a twin-engine H-6K bomber dropping the weapon. The video then cuts to a large explosion.

The H-6K bomber can carry only one of the bombs, which based on the video appears to be around 30 feet long. The Chinese air force and navy together operate around 150 H-6s. The type is a copy of the Soviet Tu-16 bomber from the 1950s.

The H-6K, which entered service in 2009, features modern engines and sensors.

Like the new Chinese munition, the American MOAB is 30 feet long and weighs more than 11 tons. It’s a thermobaric bomb, meaning it relies on a shock wave, rather than metal fragments, to inflict damage.

The American MOAB likewise is 30 feet long and weighs more than 11 tons. It’s a thermobaric bomb, meaning it relies on a shock wave, rather than metal fragments, to inflict damage.

A similar class of large weapon called a "fuel-air explosive" works by spreading then igniting a cloud of flammable gas. As the gas can spread into bunkers and even underground, a fuel-air weapon can collapse fortifications and tunnel networks over a radius of hundreds of yards.

U.S. troops dropped fuel-air bombs during the Vietnam War in order to flatten large areas of forest for helicopter landing zones, and the Bush administration dropped at least one “daisy cutter”—a kind of MOAB precursor—on terrorist forces in their caves at Tora Bora in Afghanistan in 2001.

The Pentagon hurried development of the MOAB—also known as the “Mother of All Bombs”—in early 2003 in order for the weapon to be ready for the invasion of Iraq.

But the MOAB proved either unnecessary or too risky to use in Iraq’s densely-populated areas. The giant bombs remained in storage until April 2017, when a U.S. Special Operations Forces transport plane dropped one on Islamic State fighters in mountainous eastern Afghanistan.

In 2007, Russia claimed it tested a MOAB-style weapon that it termed the "Father of All Bombs. "In its destructive capability, it is comparable to low-yield nuclear munitions,” one Russian military scientist wrote in the Russian trade journal Military Knowledge.

But the carefully edited video of the test that the Kremlin released actually undermined the government's claim.

The video never showed in the same shot the bomb and the Tu-160 bomber that supposedly dropped it. It's unclear whether the Russian bomb is a thermobaric or fuel-air explosive.

The distinction matters. A NORINCO representative told Global Times that the bomb in its video is not thermobaric, implying that it's a fuel-air weapon, instead.

Fuel-air bombs are less reliable than thermobaric weapons are. "The mixing process is highly randomized – very difficult to control on the battlefield," Tom Burky, a senior research scientist at Battelle, an Ohio-based defense contractor, said in 2007.

After surrendering most of its purpose-made chemical weapons beginning in 2013, the regime of Syrian president Bashar Al Assad switched to using improvised fuel-air weapons against civilians.

In September 2013, a regime warplane dropped a fuel-air bomb on a school in Ar Raqqa, killing 14 people including 12 children. “Some of the bodies were apparently thrown against the courtyard wall, which suggests they were forced there by the blast wind,” a Human Rights Watch researcher reported.

In any event, it seems China now possesses some kind of very-large, non-nuclear weapon to arm its growing fleet of modern H-6K bombers. It's not hard to imagine applications for the combination of H-6Ks and Chinese MOABs.

Taiwan's military plans to hide troops, vehicles and warplanes inside caves and tunnels during the opening phases of any Chinese assault on the island country. H-6Ks dropping powerful thermobaric or fuel-air explosives could threaten those underground hideouts.

David Axe edits War Is Boring . He is the author of the new graphic novels MACHETE SQUAD and THE STAN. This article first appeared last year.