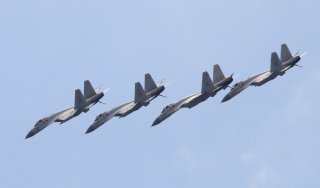 Here's What You Need to Remember: A new AESA Radar would help the old J-11B in trying to maintain its ability to fight and win a modern war.

Based upon and inspired by the Russian Su-27, the Chinese J-11B heavy fighter plane has been flying for decades and has likely been in need of an upgrade for many years. Now, a news report says the aircraft appears to be getting a new longer-range, more sensitive radar attack and detection system. A new variant of the J-11B is reported to now be entering production, according to news reports.

While the exact configuration of the potential upgrades may not be fully known, according to the Chinese government-backed Global Times newspaper, but a new radar dome structure may be a new AESA radar to replace the existing pulse-doppler system.

If the J-11B Chinese fighter is, in fact, receiving an AESA radar, that would be a significant development in terms of changing the tactical equation with the aircraft. More sensitive, multi-directional, multi-frequency AESA radar applications increase range and signal fidelity, meaning aircraft could see and attack enemy targets at much greater standoff ranges.

This could be an important development for the continued functionality and tactical relevance of the J-11B because as a large, less maneuverable, non-stealthy aircraft, greater standoff attack ranges would clearly seem to make it less vulnerable to destruction and therefore potentially more useful in a combat operation.

An upgrade of this kind would certainly follow a page from the U.S. book, as the U.S. Air Force has been adding new AESA radars to a number of aircraft in recent years, including the F-35 and upgraded F-15s.

At the same time, even if the photos of the new J-11B variant are proven to show a new AESA radar, it is by no means clear that it parallels the performance specs of U.S. Air Force AESA radar systems, particularly those upgraded, ultra-modern radar applications now being built into F-35s and the new F-15EX aircraft.

Also, radar alone does not guarantee overmatch, as the performance or potential combat engagement success of a fighter aircraft rests upon a range of factors including other sensor systems, computing, advanced avionics, maneuverability, and crucial variables such as weapons capability, range, and guidance sophistication.

Upgraded F-15s, for example, are not only receiving AESA radars but also new high-speed computing, data systems, and weapons applications, among other things. Targets can perhaps be found with much greater tactical efficiency through the use of AESA radar, but that may not mean the AESA-enabled aircraft could target, engage, destroy, or out-maneuver an enemy in the event of a combat confrontation.

In essence, it may be that the J-11B will be obsolete soon, if not already, regardless of whether it has a new radar.