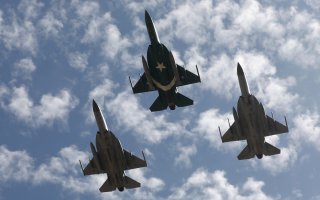 Here's What You Need to Know: While the Thunder is not particularly sexy compared to cutting-edge stealth fighters, its seems capable for its price.

In the 2019 Paris Air Show, Pakistan demonstrated its lightweight JF-17 Thunder jet fighter it began building a decade ago in conjunction with China. You can see the seven-ton fighter performing maneuvers in this video.