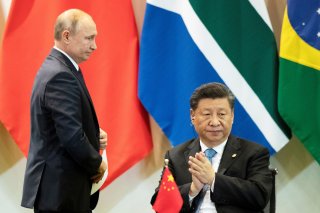 Here's What You Need To Remember: China’s northern neighbor is trying to make the best out of Beijing’s rise. While Russia has its reservations about the implications of China’s new military strength and its track-record of reverse engineering foreign technologies, its interest in forming a united front with Beijing to counterbalance the West is even greater. Only one question remains: will it be this way for long?

Even with its economy starting to slow down, China’s military is still on the rise. Years of higher military spending fueled by high economic growth are starting to manifest themselves in new technologies and newfound assertiveness. Beijing has made visible strides in its aviation, naval, and missile defense capabilities. Whether it be making territorial claims in the South China Sea or opening up its first overseas military base in Djibouti, China is starting to exert military influence in its near abroad and beyond.

How does Russia view this development? Even as Moscow and Beijing strengthen their cooperation across all areas, many Western experts warn that China’s growing military might will increasingly become a source of tension between the two countries.

“At the present moment, our national interests coincide with China’s national interests so the development of China’s armed forces and military technology does not alarm Russia’s military command and political leadership,” said Yuri Tavrovsky, a professor at the Russian People's Friendship University.

Nevertheless, Tavrovsky admitted that there was some level of apprehension in Moscow about China’s military build-up. “In the long run, we watch China’s success and do not rule out any possible scenario because we remember how Beijing’s foreign policy changed from the 1950’s to the reform period under Deng Xiaoping,” he said.

Alexander Lukin, a China scholar at the Higher School of Economics, expressed a similar sentiment. “My sense is that there is understanding [in the Kremlin] that someday China could pose a problem, but right now these concerns are far less than the concerns regarding the West,” he told me.

“Hypothetically speaking, if relations with the West were better, then the approach to China would probably be different,” Lukin said. “But since relations are not getting better and are unlikely to get better, the tendency towards closer cooperation with China will continue.”

Overall, the Russian analysts The National Interest spoke to did not regard China’s military buildup as a direct threat. Viktor Murakhovksy, editor-in-chief of the Arsenal of the Fatherland magazine, told me that Beijing’s efforts were clearly aimed at Washington, not Moscow.

“If you look at the situation geo-strategically, China does not have an interest in expanding in Russia’s direction and has a very clear observable interest in securing its security in the South China Sea and further out in the Pacific Ocean region,” he said.

Russia’s and China’s shared desire to balance the United States greatly shaped how the experts that The National Interest spoke to viewed China’s newfound military might. Some even saw it as a potential blessing for Moscow. Tavrovsky argued that Russia benefits from a stronger China which can more effectively challenge the United States.

“It was one thing when Russia was the only strategic adversary of the West,” he said. “Now that the National Defense Strategy [of the United States] lists two adversaries, all of America’s and the West’s resources are divided between our two countries.”

Tavrovsky noted that the United States’ growing emphasis on containing China “to a certain degree lessens the pressure on Russia.”

In Washington, a growing number of policymakers and analysts are concerned about Beijing’s global military ambitions. By contrast, in Moscow, China is praised as a conservative and responsible military power.

“China so far is behaving in a very restrained manner,” Lukin told me. He argued that with its current financial resources, Beijing could have had numerous overseas bases by now if it wanted to. That China’s global military footprint remains small is evidence for Lukin that the Chinese “are more interested in resolving economic problems” than in expanding their military influence abroad.

Lukin concedes that with its mounting global economic interests, China is likely to increasingly rely on military force to safeguard those interests. But he asserted that “even if China will increase its military activities, it will take a hundred years before it can compare to that of the United States.”

Furthermore, he stressed that even a more militarily active China is less threatening to Russia than the West because Beijing’s foreign policy is less ideological than Washington’s.

Russia played an instrumental role in helping to equip the new Chinese armed forces. According to the Stockholm International Peace Research Institute, China was Russia’s largest weapons purchaser from 1999 to 2006, with China accounting for as much as 60 percent of Russian arms exports in 2005. However, over the subsequent years, China’s share of Russian arms sales fell dramatically. By 2012, it was a mere 8.7 percent.

The primary cause for this rapid decline was growing Russian anxiety over Chinese reverse engineering. For example, during the 1990s Moscow sold Beijing a number of its elite Su-27 fighters and later even granted China a license to assemble them domestically. China later canceled the contract and used the technical knowledge it gained from building Su-27 to debut its J-11 fighter, an almost exact copy of the Russian plane.

Arms trade between Russia and China has rebounded somewhat in recent years. Moscow secured a deal in 2015 to supply Beijing with the S-400 anti-aircraft system and Su-35 fighter jets, some of Russia’s most advanced weaponry. Russia is also reportedly interested in selling China the Su-57, its new fifth-generation fighter.

Moscow has no illusions about China reverse-engineering Russian arms in the future. Vadim Kozyulin, director of the Asian Security Project at the Moscow-based PIR Center,

confessed to me, “When we make deals with China, we always keep in mind that China wants to first of all copy our weapons.”

He added, “Russians understand this threat, but the instruments for pushing back against this are not that many.”

What then explains Moscow’s sudden reversal on arms trade? According to Lukin, the political fallout with the West over Russia’s annexation of Crimea in 2014 made the Kremlin more willing to accept some of the costs of tighter cooperation with China.

“Based on the Russian government’s actions, it clearly made the decision that we do not have any other choice other than to move closer to China,” Lukin said.

At the same time, Russian analysts are increasingly confident about their country’s ability to maintain its innovative edge in military technology. Tavrovsky told me that Chinese reverse engineering is less of a concern now than it was in the 1990s because unlike then, “the Russian defense industry and military research today receive sufficient funding from the government.”

He explained that the Russian military-industrial complex now “feels itself quite confident” and “sells advanced weapons and military technologies to China under the assumption that our configurations are more advanced than the ones we sell to China and other countries.”

“When they say [about China], here is a giant country, with an enormous population, a mighty economy, with an increasingly powerful military—that’s all correct,” he said. “But to feel that we are so small and miserable standing next to it, begging them to sell us some military technology—it is not like that.”

Murakhovsky added: “China will not surpass Russia in the development of key military systems. We have a formidable military-technical capability, it is continually updated and we look to the future with confidence.”

At the same time, all the Russian experts interviewed also acknowledged that Beijing has already outpaced Moscow in certain areas. Some of the examples they cited included developing a military application for artificial intelligence, shipbuilding, drone-making, and introducing anti-carrier ballistic missiles.

In the not so distant future, China could be the one selling arms to Russia. Murakhovsky told me that he thinks “purchasing certain types of weaponry from China, would be very beneficial for both countries.” In particular, he welcomes the prospect of Russia buying Chinese drones or ships.

“China has a potent shipbuilding industry. They make their frigates and destroyers like hot buns on a stove—produce several things a year and put them out to sea,” Murakhovsky said. “It is totally possible to order hulls for our prospective ships from China because the experience of our shipbuilding shows that we build very slowly.”

Thus, China’s northern neighbor is trying to make the best out of Beijing’s rise. While Russia has its reservations about the implications of China’s new military strength and its track-record of reverse engineering foreign technologies, its interest in forming a united front with Beijing to counterbalance the West is even greater. Only one question remains: will it be this way for long?