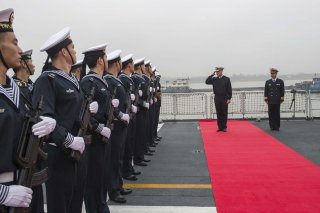 Here's What You Need To Remember:  But given the extensive commercial contacts between China and the United States, stopping the flow of technology is virtually impossible.

Image: "Commander of U.S. Pacific Fleet Inspects Sailors of the People's Liberation Army (PLA) Navy During a Visit Near Shanghai" by #PACOM is licensed under CC BY-NC-ND 2.0