China's Military Is Having More Than Just a Growth Spurt 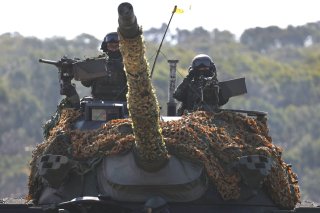 Here's What You Need to Remember: Chinese military power is changing shape and expanding beyond its Western Pacific backyard.

Western media seized on a new Pentagon report that Chinese bombers are training to strike deep into the Western Pacific, including Guam, the Philippines and Japan.

But China's military is improving in numerous other ways, according to "Military and Security Developments Involving the People's Republic of China 2018," a report that the Pentagon is required to deliver to Congress each year.

Forget the Cold War stereotype of Chinese human waves. The world's largest army is moving from a clumsy big-unit doctrine of corps-sized operations to a more Western (and now Russian) model of maneuver by brigades and battalions waging combined arms warfare. "Each group army now consists of multiple combined arms brigades, an artillery brigade, an air defense brigade, a SOF [special operations forces] brigade, an army aviation brigade, an engineer and chemical defense brigade, and a service support brigade," the report notes. "The subordinate service support brigades provide group armies an integrated ability to set up a command network and organize battlefield transportation and equipment repair for their tactical units."

The People's Liberation Army is embracing all those capabilities that make an army more deadly than mere numbers suggest. 2017 "saw increases and improvements in air defense, artillery, sustainment support, engineers, and chemical defense systems at all echelon levels. This selective modernization enables the shift to the brigade and battalion as the main operational echelons by giving their commanders critical organic force protection, firepower strike, reconnaissance, and sustainment capabilities."

While the U.S. military is accustomed to joint land-air-sea operations, China's military has traditionally been centered on the army, with the air force and navy as supporting players. But China is revamping its armed force into a joint force capable of combined operations. Joint exercises have become more common, and new communications networks facilitate inter-service cooperation.

China is developing multiple countermeasures to enable its ballistic missiles to penetrate the missile defense of the U.S. and its allies. These include maneuverable reentry vehicle (MARV) warheads, multiple nuclear warheads (MIRV), "decoys, chaff, jamming, thermal shielding, and hypersonic glide vehicles," according to the Pentagon report. China's government also wants to make sure that it has control over its nuclear weapons: "the PLA will likely continue deploying more sophisticated C2 systems and refining C2 processes as growing numbers of mobile ICBMs and future SSBN [ballistic missile submarines] deterrence patrols require the PLA to safeguard the integrity of nuclear release authority for a larger, more dispersed force."

"In 2017, Chinese defense industry representatives claimed to be developing long-range stealthy and near-space UAVs, and the PLA may soon begin receiving the long-range, high-altitude Xianglong UAV," the Pentagon said.

Taiwan is in trouble:

"Taiwan’s military spending remains at approximately 2 percent of its GDP," the report noted. "Taiwan’s President Tsai recently pledged to increase the island’s defense budget at a pace at least equal to overall economic growth, not including an additional special fund reserved for major defense procurements. Meanwhile, China’s official defense budget has grown to roughly 15 times that of Taiwan, with much of it focused on developing the capability to unify Taiwan with the mainland by force."

Chinese military power is expanding beyond its Western Pacific backyard. "In August 2017, China officially opened its first overseas military base in Djibouti, deploying a company of marines and equipment to the base," said the Pentagon report. "China likely will seek to establish additional military logistics facilities in countries with which it has longstanding, friendly relationships."