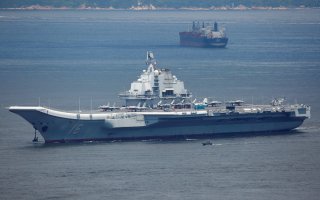 Here's What You Need to Know: A carrier-launched fifth-generation stealth fighter would massively expand China’s ability to project power internationally.

China is sending a fighter jet and helicopter armed aircraft carrier to the South China Sea as part of an overt demonstration to show that its first indigenously-built aircraft carrier, the Shandong, is ready for war.

A report in The Global Times references a CCTV video showing Chinese J-15 fighters and Z-9S helicopters taking off from the deck of the Shandong, conducting combat training operations and live-fire attack drills.

While there are many unknowns with China’s first home-built carrier, it does appear to massively increase the country’s power-projection possibilities, bringing new Pacific-area and international threat possibilities to the U.S. Navy.

One of these threat possibilities includes the possibility that China is now building a new, carrier-launched variant of its fifth-generation J-31 stealth fighter to rival the U.S. Marine Corps F-35B and Navy F-35C.

An expeditionary fifth-generation stealth fighter able to operate from Chinese amphibious ships and aircraft carriers does bring new attack possibilities for maritime commanders seeking to project power. The possibility certainly does align with China’s well-known work to build its own indigenous fleet of aircraft carriers.

While there has been much discussion about the extent to which China’s J-31 fighter jet clearly seems to replicate the U.S. F-35 fighter jet in terms of external configuration, many of its internal components may simply not be fully known. Despite what appears to be a transparent attempt to possibly “rip off” F-35 design, it is not at all clear if an FC-31 would in fact rival a Navy F-35C. Much of this would rely upon sensor technology, weapons range and onboard computing, as those areas encompass many of the attributes unique to the F-35 fighter jet.

The conventional wisdom seems to be that China plans at least four domestically-built carriers to further emerge as a major international maritime power. The move with carriers is all part of a broader strategic Naval modernization campaign which has been fast-moving for many years. Many observers and even U.S. Congressional researchers have taken notice of Chinese Naval modernization and, in many instances, made the point that it may soon rival or even surpass the U.S. Navy in terms of sheer size. Recent assessments have maintained that the Chinese plan to operate as many as 351 ships, a number significantly greater than the U.S. Navy.