China's New H-20 Stealth Bomber Might Be Under This Sheet 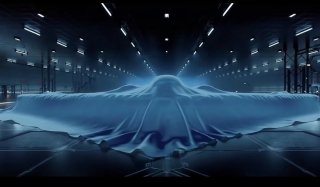 Back in January, the Chinese People’s Liberation Army Air Force (PLAAF) may have shared video footage of its still-to-be officially unveiled Xian H-20 stealth bomber. The quick “sneak peek” of the next-generation, long-range strategic stealth bomber appeared in a PLAAF 2021 recruitment video that has since been making the rounds on the Internet.

Titled, “Dream of Youth,” the recruiting video (see above) first appeared on YouTube on January 5, 2021, and it followed a pair of recruits – played by Chinese actors Jackson Yee and Wu Jing – as they join the PLAAF and become pilots. It ends with an unveiling of the aircraft that they’ll be flying. In the closing minute of the video, a previously unseen bomber was revealed in a type of dramatic fashion normally reserved for automotive trade shows – as a white sheet covering the aircraft was removed, showing a flying wing design with two intakes at the back of the airframe. Seen only in a reflection of one of the pilot’s helmet visors it didn’t provide a detailed look at the aircraft, but across social media, it was suggested the aircraft was the H-20.

A caption also noted, “CCTV [China Central Television] is funded in whole or in part by the Chinese government,” and it certainly doesn’t get more “official” than that.

It is apparent that China has certainly been taking a cue from the west, not only in aircraft design but also in how to make a media splash.

What We Sort of Know, For Now

The H-20 subsonic stealth bomber is still believed to be in the development phase, but it highlights the efforts that Beijing has made in building its world-class military.

The H-20 will be the first dedicated strategic bomber developed by China, and it is believed to be capable of carrying upwards of 10 tons of munitions and could have a maximum range of around 5,000 miles. That would be a major step up from the PLAAF’s current H-6 bomber – a licensed-produced variant of the Soviet T-16 bomber developed in the 1960s – while the H-20 will likely be armed with long-range land-attack cruise missiles.

Pentagon officials have expressed concerns that when the bomber enters service it would be able to target U.S. overseas territories including Guam, while military analysts have warned it could even reach Hawaii.

A report from last October released by the London-based Royal United Services Institute for Defence and Security Studies also suggested, “Armed with nuclear and conventional stand-off missiles, the H-20 would represent a major break from previous PLAAF doctrine and equipment development practice.”

Such a platform would give the PLAAF, which the South China Morning Post reported still operates largely as a regional force that is capable of penetrating the first island chain, into one that has intercontinental power-projection capability.

Not An Entirely New Design

The Xian’s flying wing profile has already earned comparisons to the U.S. Air Force’s B-2 Spirit bomber, and future B-21 Raider.

Based on what has been released, the Chinese bomber will likely utilize composite materials and operate at subsonic speeds to reduce its radar signature.

Wei Dongxu, a Beijing-based military analyst, told the Global Times that the design could mean that Beijing has achieved a generation-leaping development in bomber aircraft, and could soon be in possession of a world-class strategic stealth bomber.

This most recently released video tease of the H-20 follows a promotional video that was released in May 2018, which also showed the front outline of a similar-looking aircraft under a sheet.

For now, that is about as much that is actually known about the bomber, and it could be a while before any solid information is released as Beijing has managed to keep the lid on the aircraft.