China's Nuclear Arsenal Is Getting Larger, But It Remains Far Smaller Than America's 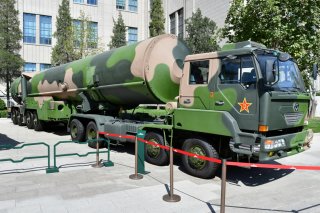 China is expanding its nuclear capability which is what one would expect from a country that is preparing for a major war in Asia on the assumption it will have to fight the U.S. We face a very serious threat from China and its growing nuclear weapons capability is a key component. We may face a nuclear threat from China which is significantly greater than what most U.S. analysts will admit. If China plans to fight the U.S. it would be stupid to do so with an inferior nuclear force when it is now relatively easy for the Chinese to close the gap in nuclear weapons numbers and actually move ahead in the next ten years. China’s growing nuclear capability makes the confrontations that it is deliberately generating very dangerous.

Dr. Mark B. Schneider is a senior analyst at the National Institute for Public Policy and a former senior official in the Defense Department.

This article by Mark B. Schneider originally appeared at Real Clear Defense. This article first appeared in 2019.