China's (from Russia) Kilo-Class Submarines Can Sink Just About Anything 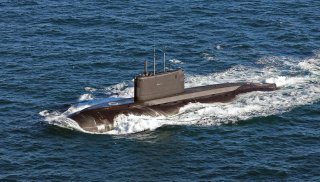 Here's What You Need To Remember: Chinese submarine technology has progressed in leaps and bounds, and the Kilo-class may be to thank. Even though China does seem to be more intent on projecting force farther and farther away from the Chinese mainland, the Kilo-class is nevertheless the backbone of China’s anti-access/area denial strategy at sea—especially close to home. It would be wise for surface ships in China’s backyard to be wary.

Because the Kilo-class uses diesel-electric propulsion, they have shorter range and endurance than nuclear powered submarines. Naval expert H. I. Sutton explained that the Kilo-class “uses heavy-duty lead-acid batteries to power the propeller. These are occasionally recharged using diesel generators, an arrangement known as diesel-electric.”

Recharging the Kilo’s batteries takes time away from missions, and requires surfacing or raising a snorkel near the surface which is risky because the sub might be detected. In addition to oxygen, other mission limitations include the crew’s food and water supplies, as well as diesel fuel for the on-board diesel generators used in battery recharging.

Kilo-class submarines have a crew complement of fifty-two and can be out on patrol for over a month—up to forty-five days. It’s maximum dive depth is about 300 meters, or a thousand feet, and reportedly the subs have a range of 12,000 kilometers, or about 7,500 miles.

Chinese submarine technology has progressed in leaps and bounds, and the Kilo-class may be to thank. Even though China does seem to be more intent on projecting force farther and farther away from the Chinese mainland, the Kilo-class is nevertheless the backbone of China’s anti-access/area denial strategy at sea—especially close to home. It would be wise for surface ships in China’s backyard to be wary.