The Chinese J-16 Was Inspired by Russian Hardware 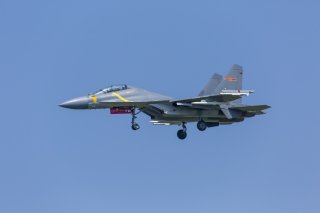 Here's What You Need to Remember: A better fighter aircraft and an electronic warfare plane would both make a huge difference for China's military.

The Growler is derived from the F-18 Super Hornet fighter and is faster, more maneuverable, and more heavily armed than preceding aerial jamming platforms based on transport and attack planes. This allows the Growlers to contribute additional firepower to strike missions, keep up with fighter planes they are escorting, and potentially approach a bit closer to hostile air defenses.

The aircraft in question is a variant of the two-seat J-16 Red Eagle strike plane—itself a Chinese copy of the Russian Sukhoi Su-30MKK Flanker. The two-seat Red Eagle is roughly comparable to the American F-15E and improves upon the Russian original with new avionics including an Active Electronically Scanned Array radar (AESA), the current state of the art in fighter-based radar technology. While China has had major problems developing reliable high-performance jet engines, it’s more successful at producing advanced electronics, perhaps due to crossover with its civilian electronic sector.

After all, China is more famous for how its own missile systems serve in its antiaccess/area-denial strategy. Where might China actually confront enemy air defenses? Of course SEAD aircraft would have application in a conflict with Taiwan or, more unlikely, Japan. However, the electronic-warfare aircraft may be most oriented at countering U.S. Navy surface warships, which bristle with SM-2, SM-6, and Sea Sparrow surface-to-air missiles for shooting down both hostile aircraft and antiship missiles. These are especially potent when their firepower and sensors are coordinated by the Aegis combat system, which includes vessels in the American, Japanese, South Korean, and (soon) Australian navies.

This article first appeared earlier. It is being reprinted due to reader interest.