The Chinese Military Is Turning Robo-Shark From Dream to Reality 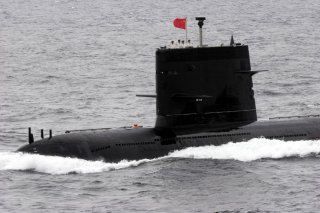 Here's What You Need To Remember: A key measure of comparison, it would seem apparent, likely resides in the information flow capacity of the drones and the range and resolution of its sonar and undersea detection. Even extremely long-range and precise detection, however, is of questionable value if it cannot become available until the drone returns to its host submarine.

The U.S. Navy is by no means the only force that sees the incredible value undersea drones can provide commanders in terms of high-risk surveillance, clandestine targeting reconnaissance, countermine operations and of course unparalleled endurance. Many of them can launch from missile tubes built into host-ship manned submarines beneath the surface and operate with less risk of detection in hostile waterways less approachable by submarines.

The Chinese Navy is now talking about its new “Robo-Shark” fish-like undersea drone able to operate with a low acoustic signature at high speeds for reconnaissance and anti-submarine warfare.

“Replacing the traditional propeller, the Robo-Shark’s power source is the bionic tailfin, which can give it a top speed of six knots,” according to the Chinese Communist Party-run Chinese Global Times.

The report does say the Robo-Shark can conduct anti-submarine operations, however available photos do now show an armed drone able to do much more than some reconnaissance. While little information regarding the Robo-Shark’s technical attributes are cited in the Global Times report, it may be unknown as to whether it can parallel any of the many U.S. Navy Unmanned Underwater Vessels now in development.  The U.S. Navy is currently exploding with a new fleet of undersea drones of all sizes, including small, mine-hunting drones and larger, submarine-like, torpedo-armed drones.

A key measure of comparison, it would seem apparent, likely resides in the information flow capacity of the drones and the range and resolution of its sonar and undersea detection. Even extremely long-range and precise detection, however, is of questionable value if it cannot become available until the drone returns to its host submarine.

Real-time, undersea data sharing can be essential when it comes to tracking, following and potentially attacking enemy surface ships and undersea platforms. Primarily undersea drones have remotely gathered data which is then downloaded upon return, however, there are a few cutting edge ways the U.S. Navy is enabling much greater levels of undersea networking.  In a simple sense, deep underwater drones can connect with a physical cable to a surface buoy and send data renderings of gathered imagery to the surface and air platforms instantly. They could also be engineered with an antenna and transmit data upon surfacing.

The U.S. Navy is, however, fast progressing with various kinds of real-time-undersea data sharing which would bring a paradigm-changing measure of operational flexibility and response opportunities for manned submarines. For example, should a small undersea drone discover an enemy submarine, it would of course be extremely crucial if a manned host ship could learn its location right away in order to maneuver into an attack position. Should the host submarine only learn of the enemy target after the detecting drone has returned and downloaded its data, too much time may have passed and a manned submarine may simply not be able to respond as circumstances and locations will have changed.

One interesting now-in-development Navy drone, Raytheon’s Barracuda, is engineered with a wireless undersea data link and autonomous algorithms such that it can find, track and even destroy enemy targets such as mines, without needing human intervention.

Should the Chinese be operating drones with this kind of capacity, U.S. submarines and surface ships could be put at greater risk. However, the U.S. Navy has been working on undersea networking for many years and, based on available information in the newspaper, the new Robot-Shark Chinese undersea drone seems unlikely to rival the United States.