Is Chinese Overfishing Destroying the Environment? 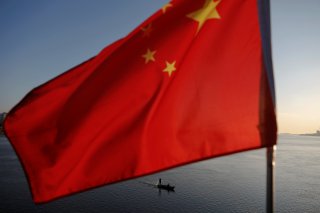 Here's What You Need to Remember: Washington and its allies should instead adopt a more cooperative demeanor with the understanding that serious fishing disputes are extremely common all over the world and are rarely pleasant.

o believe the leading international media sources, Beijing is a giant, malicious “Death Star” of sorts, spreading environmental mayhem, political oppression, atheism, economic dependency, and increasingly wielding the coercive tools of a hegemonic power on a global scale. A rather typical rendering in this growing genre was an “in depth” investigation published on the front page of the New York Times that described a newly completed major Chinese dam project in Ecuador.

The teaser for the article pointedly reads that every Ecuadorian leader involved with the project is already in jail for taking bribes. If one reads through the entire article, however, one finds that these bribes were actually proffered to the Ecuadorians by Brazilians rather than Chinese in almost every proven instance. The authors find it disturbing that the new Chinese dam operating at full capacity would overload Ecuador’s national grid, but oddly place the blame for this on the dam-builders rather than simply suggesting that the grid likely needs further upgrading (as in many countries) to handle the new capacity. It might indeed be good to have a problem of over-capacity rather than under-capacity. It’s not to say that there are not many wholly legitimate questions to ask about this dam project (e.g. silting, volcanic dangers, etc.), but these journalists ignored other aspects of it. Next to their litany of complaints about the dam project, they might have explored alternative viable approaches to bring electricity to the people of Ecuador if such alternatives do indeed exist. They also might have examined comparable projects undertaken by other external powers to see if they were better managed and had incurred lesser debt obligations. Oddly, the authors insist that “China still gets paid” no matter what, but that is really not true if Ecuador is actually on the brink of financial collapse—an outcome obviously not remotely in Beijing’s interest. One doesn’t have to undertake an academic study to realize that all major development projects of this type should assess both costs as well as benefits, and should be evaluated in an objective and also comparative framework. Alas, China-bashing continues to sell a lot of newspapers, for sure. Then again, it’s safe to assume that U.S. companies have also been active in the Andes and have also offered less than a stellar example.

But let us leave the alluring (if unsettled) Andes and return to more familiar strategic terrain for strategists and China-watchers: the “boiling cauldron” of the South China Sea. Here, Beijing has been pilloried for environmental depredations over many years. The famous Scarborough reef incident back in 2012 had as its spark, apparently, some Chinese fishermen that were allegedly poaching giant sea turtles. In building up its reef bases, China seems to have inflicted wanton destruction on the relevant reefs with likely long-lasting impacts on local ecology. The Chinese argument that the bases are needed to offer protection to its own fisherman in these treacherous sea areas has hardly elicited sympathy, but has rather engendered even greater anger and suspicion. Gobs of ink have been spilt, moreover, on the subject of how and whether the Chinese “maritime militia” operates to foster gray-zone expansion in the South China Sea. Again, there are surely legitimate questions worthy of exploration here, not least of which is how other powers, including also the United States, have occasionally employed fishing vessels (or close equivalents) to accomplish strategic goals. Yet, a mid-2018 article in the Mandarin-language journal, China Fisheries [中国水产], hints that we may be missing the forest for the trees, or alternatively missing the ocean for some specimens of sea cucumber.

The article explains in its very first sentence that China put in place a system in the late 1980s designed to strictly “control fishing capacity.” The article summarizes nearly thirty years of data collection by China’s Agriculture Ministry and concludes quite emphatically that Beijing has failed in this respect. The data reveals that China “has absolutely not reached the requirements of national plans [并没有达到国家规划要求].” The paper outlines that for a long time, certain bureaucratic accounting tricks, such as “making a big machine appear small [大机小标]” have been “extremely common.” As a result in China overall, “the real number of fishing boats and equipment efficiency has far exceeded national statistical data [渔船实际数量和装机功率远远超过国家统计数据].”

The ample data in the article, such as it is, also reveals various troubling trends, however. During the so-called period of “rapid growth,” it is reported that China had 52,200 motorized fishing vessels in 1979, but that this increased already to 268,000 by 1987. Disturbingly, the number of destructive trawlers apparently increased 81.6 percent during that period of unrestricted growth. For our purposes, however, the data governing the period of 1988–2015 is of greatest interest, naturally. Here, these Chinese specialists report that the aggregate number of motorized fishing vessels increased from 303,900 to 672, 400. Yet, while the aggregate numbers more than doubled, the actual reported catch (measured in tons) is said to have almost tripled to reach over thirteen million tons in 2015. Based on these numbers, the Chinese authors starkly conclude: “marine fisheries overall numbers absolutely have not achieved effective control [海洋捕捞总量并未得到有效控制].” Yet, some glimmers of hope are still evident in the generally sobering data set. The aggregate catch has increased in recent years, but it still reported to be well under the year of maximum total Chinese catch, which was way back in 2000. The number of motorized Chinese fishing vessels is reported as falling since its peak in 2012. Trawler tonnage, in particular, is said to down from its peak in 2003. Given the initial caution on the veracity of the data, however, it is hard to be optimistic about the overall situation.

The study documents a number of serious problems impacting fishing in China’s proximate sea areas. For example, it states that Chinese trawlers operating in the South China Sea have “seriously damaged the sea bottom environment [严重破坏海底地貌环境].” It is explained that fisheries enforcement personnel are too few. In addition, they often lack adequate training and “lack for . . . technological methods.” The current regulatory system is criticized as costly and inefficient. In such circumstances, “Fishermen do not cooperate and even resist inspections [渔民不配合甚至对抗检验].” Then, there is the phenomenon of “appealing to a higher authority for help [上访]” and thus actually “threatening the ship inspectors.” A major problem that has not fundamentally been addressed, according to the article is the issue of “many heads, decentralized enforcement [多头分散执法].” The article suggests that there are, nevertheless, reasons to hope that improved governance can favorably impact the difficult situation, as data on fish populations illustrates for the East China Sea and this is reported to be related to “seasonal fishing closures [休渔期].” Somewhat remarkably, the Chinese authors actually conclude the article by citing the fact that both Japan and also the United States have taken steps to reduce their fishing fleet tonnage and China should thus follow these other maritime powers in order to protect the earth’s oceans in peril.

Painting Chinese fishermen as malevolent rogues that threaten ecological and also global security could be psychologically satisfying in certain respects and Western journalists are evidently chomping at the bit to tell this nefarious story. There are indeed complex bilateral and multilateral governance issues that Beijing must deal with concerning its impact on fisheries with many countries the world over, and perhaps especially with respect to the great archipelagic states of the Asia-Pacific region.  Transparency, to include especially much better tracking of the origin of the catch as it’s brought into ports, will be crucial to cleaning up this difficult situation and placing it on a sustainable, ecologically sound basis.

Yet in seeking to militarize or “securitize” multi-faceted and intricate fisheries disputes with China, the United States and its allies will quite likely produce the predictable outcome of inciting further hostility and bringing about possible escalation of these disputes. After all, common sense dictates that two nuclear powers will not initiate combat over fishing rights. We are left to seek a more rational path forward, which relies more on research data regarding various fish stocks than it does on anti-ship cruise missiles (of which China has plenty).

Washington and its allies should instead adopt a more cooperative demeanor with the understanding that serious fishing disputes are extremely common all over the world and are rarely pleasant. As the article summarized above strongly suggests, many Chinese specialists are eager to help gradually bring China’s large fishing fleet into greater conformity with global ecological norms, and this effort, moreover, did not begin yesterday. Two new U.S. initiatives to substantively address major concerns with China’s fishing fleet could include developing a joint Coast Guard patrol consisting of China, the United States and Africa. The three countries would work together to police illegal fishing practices in that crucial domain. Another option consists of initiating large-scale cooperative research endeavors with China’s fine ocean research universities (Qingdao, Shanghai and Guangzhou) that focus on improving fisheries management. Many more similar, maritime-focused cooperative initiatives are needed between Washington and Beijing to protect the world’s oceans, even in an era of great-power competition.