The Chinese Panda Revival is Hurting the Wider Ecosystem. Why? 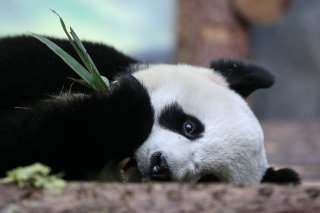 At a time when we crave good news, the giant panda is a beacon of environmental optimism. Since becoming an icon for the conservation movement in the 1980s, 67 panda reserves and countless wildlife corridors have been created in the bamboo forested mountain ranges of central China. The most recent census suggests all that effort has paid off. There are 1,864 pandas living in the wild today, up from 1,000 in the late 1970s.

But in a new study, researchers discovered that what’s good for the panda may not necessarily be good for the rest of the ecosystem. After studying images from camera traps over ten years, they found that large carnivores – the leopard, snow leopard, wolf and dhole (an Asian wild dog) – have retreated from where giant pandas have thrived. Their numbers appear to have fallen significantly in these panda reserves, and the researchers note that the wolf and dhole may be functionally extinct within them, while the tiger has already been driven to extinction here. Panda conservation doesn’t appear to be benefiting other species, or the wider ecosystem.

These findings shake the foundations of one of conservation’s most enduring ideas – that investing time and money into protecting particular large, influential species can pay dividends for the other species and habitats they coexist with. In the aftermath of that revelation, what do we really know about how to protect ecosystems and save wildlife from extinction?

How to Think About Ecosystems

Single species conservation was the dominant idea during the latter half of the 20th century. Conservation groups and governments identified particular species in need of urgent help and used their images to raise public support to help save them from extinction.

The poster children of this approach were the giant panda and the tiger. Both of which have been success stories, for the target species at least.

But while lavishing these charismatic species with attention and resources, this approach tends to overlook less attractive species, such as worms, despite them potentially having more ecological value.

Today, conservationists place much greater emphasis on protecting ecosystems and entire landscapes. The logic being that you can more effectively maintain an area’s ecology if you treat it as a functional system.

A useful analogy is to compare an ecosystem with an organism, such as the human body. Each is made up of many working systems, whose roles are maintained by species in the case of the former, and organs in the latter.

Alternatively, replace our organism with an aeroplane. For the aeroplane to fly and land safely, all the components need to work. If an engineer only maintains one component, like the engine, and ignores the wings, wheels and navigation system, the flight is going to end badly.

The lesson from both analogies is that all components and the roles they perform are necessary for keeping the whole functional and healthy. An aeroplane may only tolerate the loss of so many rivets, before losing one that’s vital, or losing enough to cause mechanical breakdown. Losing the function of one organ can cause multiple systems to fail within the body.

Focusing on a single species in conservation isn’t necessarily wrong, though. A focal species can act as a flagship, an ambassador that raises support (and money) for conservation of an entire area. Pandas are very good at this.

But there are also umbrella species. For example, beavers modify their habitats so extensively that they create numerous niches for other species to occupy. In that sense they’re like an umbrella, that if protected, will provide shelter for other species.

So why did panda-targeted conservation fail to revive populations of large carnivores in central China? Well, a panda’s habitat requirements are small compared to a wolf’s or a leopard’s, and the threats facing them in the wild are very different. Pandas are also famous for their specialised diet – a carnivore turned herbivore – and so their needs differ greatly from your average large predator. Put simply, a habitat catered to sedate, bamboo-munching pandas isn’t likely to help a nomadic, meat-loving leopard.

Large carnivores don’t have it easy worldwide. They need large areas of suitable habitat and lots of prey. In most areas they once occupied, humans have destroyed habitat, removed native prey species and killed large carnivores by gun, trap or poison, either because they hunt livestock or because they are seen as a danger.

The tiger is one of the few large carnivores whose populations have increased in recent years. India has seen its tiger population grow by a third since 2014. Considering the challenges of coexisting with these large predators – animals that occasionally kill humans – this success is impressive.

India’s approach to tiger conservation prizes tolerance, education and working closely with the communities that live alongside this species above all else. Part of that education is recognising the tiger as just one part of the ecosystem, all of which needs protection.

What the panda study tells us is that we cannot assume a flagship species will also be an umbrella species. While individual species are important, some are more important than others for maintaining a healthy ecosystem.