Climate Change Is Putting America's Largest Navy Base In Jeopardy 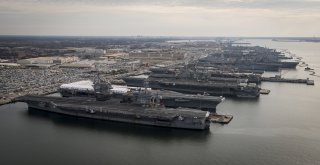 Here's What You Need to Remember: The combination of climate change and defense austerity makes the United States particularly vulnerable, as it could become difficult to protect current assets and replace destroyed ones.

Robert Farley is a senior lecturer at the Patterson School of Diplomacy and International Commerce. His work includes military doctrine, national security, and maritime affairs. He blogs at Lawyers, Guns and Money and Information Dissemination and The Diplomat. Follow him on Twitter: @drfarls. This article first appeared in WarIsBoring in 2014.