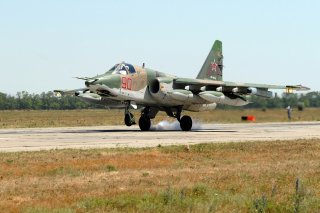 Here's What You Need to Remember: What the Frogfoot lacks in avionics and aerodynamic sophistication, it makes up for with a robust suite of air-to-surface weapons: a large breadth of Soviet S-series guided and unguided rockets, several types of Soviet heavy bombs, and a handful of short-range air-to-ground missiles designed against small ground targets.