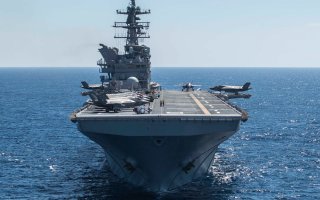 Here's What You Need to Know: The U.S. Navy continues to prepare for future war.

“The Bougainville will retain the aviation capability of the America-class design while adding the surface connector capability of a well deck,” a Huntington Ingalls official told The National Interest in a written statement.

The first two of the America-class, the USS America and USS Tripoli, were both described to me several years ago by the America-class program manager as “aviation centric,” meaning they did not include a well deck. The thinking was of course to leverage the emerging advantages brought to maritime warfare by the F-35B and Osprey aircraft. The ships include more hangar space for aircraft, a specially configured flight deck and a dedicated mission to enable the then first-of-its-kind 5th Gen amphibious attack aircraft.

The rationale, it seems clear, was also to build ships within modern concepts of operations (CONOPS) which call for an increase in aerial surveillance, transport, and power projection in response to the threat environment.  The USS America, for example, has deployed with as many as 13 F-35s, a circumstance that clearly changes the tactical dynamics associated with amphibious combat missions.

When I was aboard the USS America years ago for a visit, a Marine on the ship explained the strategic significance of Mounted Vertical Maneuver using the Osprey, essentially forward lifting Marines and weapons in behind enemy lines to conduct reconnaissance, targeting or even cover rapid-strike attacks. The flight deck and structure of America were specially engineered with these kinds of missions in mind and also modified to better accommodate the landing of the vertical-take-off F-35B aircraft. Years ago, some modifications had to be made to enable the America-class flight takes to better withstand the heat generated onto the flight deck by an F-35.

There are several significant things to consider here, as it appears the 3rd America class ship will not forsake or compromise the aviation capability characteristic of the USS America and USS Tripoli. Huntington Ingalls officials describe the America-class configuration as containing additional flight-deck space in part made possible for a smaller deck house and an additional sponsor.

This means ship launched Amphibious Assault Vehicles or troop and weapons-transporting LCACs launching attacks will now have an entirely new universe of air support which simply not possible in the pre-F-35 era. The air-surface combination afforded by the Bougainville is clearly intended to support the Navy’s Distributed Maritime Operations concept which, among other things, seeks to enable dis-aggregated, yet networked attacks involving a coordinated fleet of manned and unmanned air, surface and undersea platforms.