Congress Take Heed: Now Is Not the Time to Shortchange the National Defense Budget 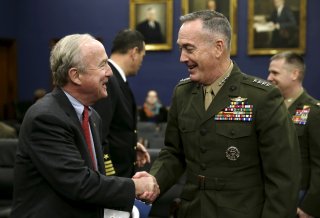 One of the unexpected consequences of COVID-19 is it forced the U.S. government to reexamine how it does its job, including how it spends on national defense. Right now, Congress must give careful attention to the national defense budget, even as it faces increasing pressure to spend on domestic programs and on issues abroad.

These competing interests come at a particularly inopportune time. The United States needs to give more support—not less—to the U.S. military in order to adequately defend U.S. interests against evolving threats, according to the newest edition of The Heritage Foundation’s Index of U.S. Military Strength, which releases on Tuesday.

The American people trust their armed forces to protect U.S. interests at home and abroad from foreign adversaries. While the U.S. spends a great deal on its military, it also asks much of it—often expecting it to do more with less resources. Today, our military faces intense challenges from many global threats.

Russia stands as a significant possible opponent in the near future. With its advanced conventional and nuclear capabilities, Russia is the principal threat to American and allied priorities in Europe. There is good reason to suspect that, if the United States engages in a major conflict any time soon, Russia may be the reason we do so.

Russian President Vladimir Putin’s invasion of Ukraine demonstrated his regime’s willingness to invade other sovereign European nations. As the ice melts in the Arctic, Russia is also taking advantage of its well-developed infrastructure in its Arctic regions to establish itself as a central player in what may be a critical new shipping frontier.

China is investing heavily in its military capabilities and is rapidly overtaking Western powers. For example, in the past three years, China has added more warships to its navy than there are warships in the entire British navy.

Though already a formidable rival, the China of 20-30 years from now could present an even bigger problem. At our current rate of military investment, we may not be adequately prepared to meet such a threat.

In their respective regions, Iran and North Korea contribute to regional destabilization through their cybercrime, missile weapons production, and nuclear programs. About 2,500 to 3,000 Iranian ballistic missiles are aimed at its neighbors, like Israel and Saudi Arabia, and some of those missiles have the range to strike targets in Europe—a sobering thought, considering that the regime is pursuing nuclear weapons.

North Korea has also been expanding its missile capabilities. It conducted nine missile tests in March 2020 alone, and it is believed its ballistic missiles can strike anywhere in the continental United States. When coupled with the large North Korean army, the security challenge extends beyond America’s regional allies to the U.S. itself.

Thankfully, the findings of the Index of U.S. Military Strength confirm that the U.S. military is currently in a better state to defend against these perils than it has been in the past. However, much work remains to be done.

The years following the Cold War saw the U.S. military atrophy due to a lack of funding. And defense funding since 9/11 has been focused only on capabilities that equip the armed forces to be successful in conflicts like those in Afghanistan and Iraq.

The Trump administration has redoubled its efforts to push better defense spending and a more realistic defense strategy. But real progress in updating current military readiness and providing for future competition has only begun to materialize.

For example, 28 of the Army’s 36 brigade combat teams are considered ready, the highest levels of readiness the Army has seen in years. This is a welcome improvement over the readiness figures from a few years ago.

The success of the last three years cannot be allowed to distract from the very real, long-term challenge posed by the future of our national security. We need defense budgets that—at the very minimum—maintain U.S. military capacity without losing purchasing power to inflation. And not just this year, but for the next 10 years, at least.

As the leadership of our nation weighs the balance between domestic spending priorities and the fate of future defense budgets, it should not lose sight of the federal government’s solemn constitutional duty: to provide for the common defense.