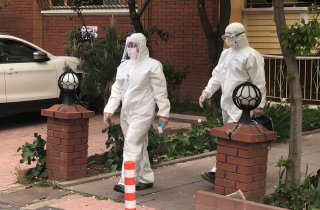 At the most basic level, controlling an infectious disease depends on interrupting its spread from person to person. This means stopping the disease at source by treating infected people; disrupting transmission using quarantine, personal protective equipment (such as facemasks) and hygiene measures; or protecting susceptible people with vaccines. In the absence of an effective treatment or vaccine for SARS-CoV-2, identifying and isolating infected people is currently the only option.

COVID-19 is most infectious around the time of disease onset and the first week of illness. After this point, infectiousness is believed to drop off rapidly. In addition, people are infectious for the two days before their symptoms start, so there’s a crucial need to identify infected persons early so that they can be isolated. This raises several key considerations for any test, track and trace system.

First, is the system fast enough to identify possible cases? If the test takes days (from sample collection to processing through to reporting results), that introduces too much delay at the point when the disease is most infectious. Testing performance in the UK is improving, but it’s not yet quick enough to provide same-day test results universally.

Tests must also be accurate. They need to avoid misidentifying infected people as uninfected, though tests are more likely to miss earlier cases, which is a recognised vulnerability. Any test also needs high negative predictive value to avoid misclassifying people as infected when they are not. While the tests currently used in the UK are pretty accurate, they are far from perfect.

Another consideration is whether the system identifies most – if not all – contacts an infected person has had during their infectious period. People may not recall (or choose not to reveal) their contacts. It is also not straightforward working out who has had significant contact. The current definition assumes “significant” to mean close proximity (less than 2 metres) and prolonged contact (more than 15 minutes). These are arbitrary thresholds.

Contact tracing is also laborious and time consuming. A study of contact tracers in Sheffield reported that each interview with an infected person to identify their contacts took around 80 minutes. The average number of significant contacts identified for each person infected with COVID-19 – around 30 contacts per case – was also high. Consequently, the workload involved is significant.

Does the UK have the capacity to trace everyone?

Public Health England (PHE) has traditionally had contact tracing expertise in its health protection teams. These teams have the capacity to contact trace perhaps a few hundred cases a week. However, if there are thousands of cases and tens of thousands of contacts that need tracing, this overwhelms the capacity of these teams. This is one explanation why the focus of contact tracing was switched in March 2020 from focusing on all individual cases to targeting high-risk settings.

As the number of infections decreases, the possibility of re-imposing individual contact tracing has become more feasible. In view of the large numbers of cases and contacts that will need to be traced, the UK government has launched a new test and trace programme and recruited thousands of tracers. The skills required are not exceptional, and contact tracers can be trained within a day. More challenging is ensuring they have adequate supervision and coordinate their efforts with PHE and local public health teams.

Good coordination between the NHS test and trace programme and PHE’s health protection teams is essential. This depends on how well information on cases and contacts are efficiently collated, linked and shared. Poor information management could lead to key pieces of information not being communicated and possible transmission links being missed. PHE uses a case management system, HPZone, that enables records to be linked and shared between teams nationally. How well the test and trace programme integrates with PHE’s case-management system remains to be seen.

Automating contact tracing has been advocated and explored through the NHS’s track and trace app. Aside from concerns around data security, for this system to work it depends on a large enough proportion of the population owning a compatible mobile device and using the app. This is unlikely. The app also cannot differentiate between health workers with or without adequate personal protective equipment who have contact with infected persons. This risks misidentifying people protected from infection as vulnerable contacts. At best, the app can play a supporting role; it cannot replace traditional contact tracing.

Are other countries’ programmes working?

South Korea is often cited as an exemplar for controlling COVID-19. Having invested in strong public health infrastructure, it was able to quickly expand testing facilities. It enhanced this with widespread digital surveillance, which enabled it to rapidly respond to emerging clusters of infection.

Like the UK, Germany has a rigorous contact tracing system that was similarly overstretched when infection numbers initially soared. However, it has since managed to boost testing numbers considerably. It’s also bolstered the local health authorities responsible for contact tracing with hundreds of additional tracers. Similarly, countries like Taiwan and Australia have managed to effectively contain the epidemic through widespread testing and tracing supplemented with apps to support disease surveillance and tracking. The test and trace recipe is similar, but the proof rests in the execution.

The UK probably could and should have expanded its testing and contact tracing programmes earlier on. As the country seeks to emerge from lockdown, having these programmes fully implemented and functioning is a prerequisite for containing further outbreaks. Without an effective system in place, outbreaks will occur, infections will spread, and there may be no alternative other than to impose further lockdowns.

One final point: a test and trace programme is only effective if contacts identified comply with instructions to isolate. People may choose not to do so for various reasons. Public trust and compliance is therefore critical. Without it, the whole endeavour fails.