Contesting Key Chokepoints Is the Key to Pacific Conflict 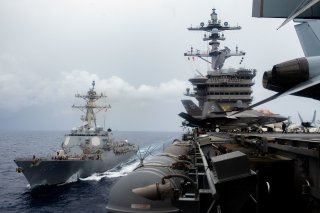 However, the areas most trafficked by pirates generally have the safest littoral bases for them to operate out of, and while relevant countries have greatly stepped up their maritime domain awareness in recent years, the PLA may suffer a deficit in intelligence of what is happening beyond the coastline and within densely forested islands. “Hit-and-run” attacks would be difficult to retaliate against effectively, especially if Marine Corps vessels and vertical lift are sufficiently quick enough to lift units and their long-range precision fires out of harm’s way. In addition, borders are infamously porous in these areas where pirates operate, complicating efforts to neatly find their bases, catch them in the act, and apply pressure to their hosts.

Navy ships cannot enter the waters of these chokepoints easily – the Sibutu Passage at the southern end of the Sulu Sea is only about 18 miles wide. If the Navy keeps its distance, merchant marine and smaller vessels are easily threatened without consequence, creating something of a dilemma on when and where to intervene. Terrain knowledge of coastal areas requires knowledge of their communities, which a hostile or occupying force will not get easily or quickly, and the areas around these specific chokepoints like the Sulu Sea are veritable vacuums of information even for law enforcement agencies.

Even in a less ideal scenario, an enemy navy would need to go ashore or be bogged down in the dilemma of dealing with land-based threats to those assets necessary for surveilling the area or an effective blockade. That detracts from other objectives, and would involve a disproportionate amount of resources. Arriving to one end of the Basilan Strait, only to discover the Marines have hopped to the other end, would be immensely frustrating.

One assumption being made is that the future Marine Corps will have some unmanned surface vessels or unmanned underwater vessels as part of its toolkit for operating in a contested domain. The core capabilities of those USVs and UUVs should be ISR and communications. The disadvantage of areas like the Sulu and Celebes Seas is that Marines will face information problems as well. A superior land-based, low-risk ISR capability would lend Marines the ability to target ships at sea, but a strong HUMINT relationship with coastal communities would similarly go a long way toward eluding the enemy and operating effectively in a contested area where the U.S. Navy may be nowhere nearby. It is worth noting these same coastal communities were key to Allied ISR efforts in the Second World War.

The Marine Corps’ future method toward strategic chokepoints and littorals could be taking the pirate’s approach and ramping it up with new weaponry, ships, superior ISR, and tactical creativity. This is not anything regional navies are suited to deal with, and definitely not something an organization like the PLAN would be comfortable responding to given it would require flexibility and initiative at the tactical level that the command-and-control obsessed PLA does not actively nurture.

Taking piracy a bit more literally, Marines could board enemy merchant marine ships operating in the area and inflict material damage to the enemy. However, the ultimate goal for the Marines in a regional conflict where the U.S. lacks sea control will be to use land-based assets to punch a hole through an enemy navy’s sea control, and then facilitate access for a friendly navy to move onto the battlefield. In this vein, the Marine Corps will find a viable operating ground in Southeast Asia’s littorals and chokepoints.

Drake Long (@DRM_Long) is an analyst and reporter covering the South China Sea and Southeast Asian maritime issues for RadioFreeAsia. He is also a 2020 Asia Pacific Fellow for Young Professionals in Foreign Policy.

This article first appeared at the Center for International Maritime Security in June 2020 and is being republished due to reader interest.