Coronavirus Is Delaying The Air Force's Acquisition Of F-35 Lasers 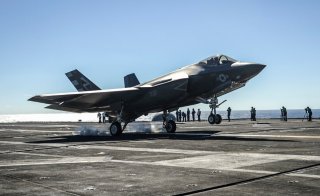 Here's What You Need To Remember: The challenge now is to get lasers down to size. And, with delays due to the coronavirus pandemic, when that will be is anybody’s guess—but don’t expect to see Star Wars-esque dogfights anytime soon.

The laser program, dubbed SHiELD, or Self-Protect High Energy Laser Demonstrator, was injected with cash in 2017 when the Air Force awarded Lockheed Martin $26.3 million to design and develop a fiber laser that would eventually be mounted on jets via a targeting pod.

In an interview with the Mitchell Aerospace Center, Dr. Will Roper, the Assistant Secretary of the Air Force for Acquisition, Technology and Logistics (and sometimes known as the acquisition Tsar), gave a reminder as to what exactly to goal of the SHiELD program is:

“The whole point of SHiELD is not an acquisition program where we’re turning out hundreds or tens of these laser systems for operational use. What we’re trying to do with SHiELD is exactly answer those questions of: ‘Is laser technology mature enough to go on an airborne platform? Have we solved enough of those technical challenges that this is now a feasible thing?’”

The SHiELD laser pod concept would be a revolution if successful. Rather than targeting enemy planes or ground-based targets, the SHiELD laser is intended to protect pilots from air-to-air and surface-to-air missiles threats. Still, the technology is in its infancy. Perhaps the biggest challenge has been shrinking the laser system down to a size that would allow it to be mounted to a jet or ship, while still being powerful enough to give warfighters an edge on the battlefield. Challenges remain.

A more modest target, like small-sized drones, might be a more practical and immediate application for the SHiELD program, Roper explained.

“What I expect to get laser weapons to the goal line has been the humble, but important and very worrisome small drone threat. They continue to show up, they’re difficult to attribute—we don’t know who is sending them to our installations and tests and things of that nature, and we can’t afford to shoot missiles at them,” he said. “So this is a perfect threat to make laser weapons real, and once they’re real, we’ll do what the military does. We’ll look to scale the power.”

It’s not the only laser program the Air Force is pursuing. In a contract opportunity posted by the Air Force Research Laboratory in January of last year, the Air Force solicited a possible replacement for the SHiELD program. The potential replacement, the Compact High-Energy Laser Subsystem Engineering Assessment, or CHELSEA, would be a smaller and much more practical-sized laser. It’s easy to see why.

Last year, the Air Force announced a successful test of a laser similar to SHiELD, the Army’s Demonstrator Laser Weapon System, or DLWS. The Air Force stated that DLWS shot down several air-launched missiles. But the laser unit is enormous.

The photograph that accompanied the announcement showed a laser pod at least the size of a SUV. While a laser of that size might just fit somewhere onboard surface ships, it would be physically impossible to get something of that size airborne in anything other than strategic bombers.

The challenge now is to get lasers down to size. And, with delays due to the coronavirus pandemic, when that will be is anybody’s guess—but don’t expect to see Star Wars-esque dogfights anytime soon.