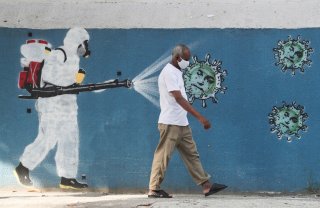 La Loma is an area of the city of Medellin, Colombia, which is divided into small neighbourhoods controlled by gangs known as “combos”. Each combo is loyal to one or other of the country’s organised-crime groups. La Loma is also a main route for trafficking drugs, narcotics and weapons to different parts of the country. These “invisible borders” divide the neighbourhood into criminal territories.

On March 24, when Colombia went into lockdown, all combos in La Loma immediately ordered curfews and implemented ceasefires. As an extra precaution, the south and north combos set up checkpoints in key places, demanding that local communities follow government restrictions and ordering people not to leave their homes outside of allocated times.

After local people received little help from the city council, these gangs began to go door to door to distribute hand sanitiser, food parcels and medicines, while demanding that residents wash their hands. On April 19, the Colombian media began to report that the Medellin city council had negotiated with different combos across the city on the best way to provide similar support to other neighbourhoods, coordinating on distributing and supplying official assistance.

The case of La Loma is not unique. The same thing is happening in other cities across Colombia and around the world.

In some regions of Colombia’s north, gangs have been regulating crime, resolving communal disputes and imposing unofficial “rules of law”. At the same time, illegal groups controlling these northern regions are demanding that the population obey government measures set in place to confront the epidemic, creating a clear system of local co-governance.

In Mexico, the situation is similar. On March 16, the Mexican government declared a national health emergency, imposing tough restrictions to combat the spread of COVID-19. Residents of Ciudad Victoria, the capital city of Tamaulipas, started to receive support from drug cartels. Since April, the distribution of food parcels (despensas), money, medicines and face masks to communities by the Gulf Cartel began to be well documented on Twitter and Facebook.

In other Mexican regions where drug cartels have established de facto governance, the same trend has followed. The Jalisco New Generation Cartel and the Sinaloa Cartel started delivering food parcels and medicines in cardboard boxes. Both cartels are using the cardboard boxes and face masks as a propaganda tool, printing the outside of both items with stencil-style images of former Sinaloa cartel chief Joaquin “El Chapo” Guzman, or the present head of the Jalisco New Generation Cartel, Nemesio Oseguera Cervantes, “El Mencho”.

Mexican cartels have also imposed curfews in some regions to stop the spread of the coronavirus in territories under their control.

In Brazil, meanwhile, it has been reported that the Comando Vermelho, a gang which has controlled for decades the famous Ciudade de Deus favela in Rio de Janeiro, has imposed curfews, forbidden tourists from entering the favelas, and encouraged local residents to wash their hands.

In Venezuela, the colectivos, the equivalent of the Colombian combos, have imposed curfews in neighbourhoods in Caracas, and encouraged residents to obey quarantine measures. The colectivos imposed lockdowns in Caracas before the government did so.

The Barrio 18 gang in Guatemala has suspended all demands for extortion payments from local businesses. The gang is also helping the implementation of health measures. In El Salvador, members affiliated to the MS13 and Barrio 18 gangs are enforcing curfews across the country.

Governing activity by illegal groups goes back much further than the current pandemic. Since 1990, some organised-crime organisations have effectively performed as governing bodies in different countries across Latin America. Drug cartels and gangs aim, in the long term, to replace some of the state’s functions in order to guarantee the prosperity of their illegal interests.

But the coronavirus crisis may represent a shift in this story. Drug cartels across Latin America have taken responsibility for providing welfare, security and a sense of certainty to the communities under their control. This is a direct result of the ineffectiveness of some states to effectively tackle the pandemic.

But there is also something new happening here: illegal groups are now appealing more to positive emotions (gratitude, solidarity, care) to bolster their legitimacy and power in the territories, instead of traditional violent coercion or sporadic assistance. The aim is to create a strong emotional bond with the community to foster their criminal operations in the future. This dynamic reinforces the well-known Robin Hood myth for criminals in Latin America (noble thieves robbing the rich and helping the poor).

This will no doubt serve Latin American organised crime well. They will probably see their image as “saviours of the people” revive. Their actions also aim to demonstrate that the state is not needed to reinforce order, guarantee the rule of law, or provide access to health welfare.

My previous research has demonstrated the crucial role of emotions in accepting or rejecting democratic ideas. The present pandemic reveals that the meaning of the state for communities depends on two emotional factors: a feeling of protection derived from the effectiveness of both legal and illegal bodies in resolving day-to-day problems, and a feeling of care resulting from the actions of legal and illegal actors to provide solutions.

As all these examples from around Latin America are showing, organised-crime organisations have been very effective in delivering help to the communities under their control, taking on the role, emotionally and effectively, of public institutions and their duty of care.

Yet for many of these groups, their ultimate source of power and strength is control over territory by co-opting the state, partially replacing some of its functions – but not necessarily replacing the state entirely.

And so the present situation will allow political parties openly affiliated to organised-crime groups, such as the parapolitics parties in Colombia, to capitalise politically on future support from local communities assisted by illegal organisations during the pandemic.

Camilo Tamayo Gomez, Teaching Fellow and Programme Director for the MSc in Security, Conflict and Justice, University of Leeds