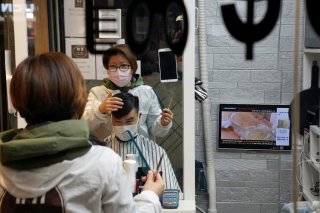 2020 has been a tough year for Hong Kong’s economy. The city was already in a recession in 2019 due to US–China trade tensions and domestic social unrest. In January, Hong Kong reported its first local COVID-19 case. The government quickly rolled out social distancing measures and travel restrictions, further reducing economic activity. In the first two quarters of 2020, real GDP fell by around 9 per cent year-on-year.

Hong Kong’s government faced the difficult trade-off between curbing the spread of COVID-19 and keeping its economy afloat. In April, the government unveiled a stimulus package to support businesses and individuals. It provided a wage subsidy valued at 50 per cent of monthly salaries, capped at HK$18,000 (US$2322). The package enabled employers to retain their employees and successfully provided relief to hard-hit sectors such as the tourism industry. Tax and loan payment deferrals, as well as principal payment holidays on residential mortgages, were also introduced.

The public health response and economic stimulus were appropriate and timely for several reasons.

Hong Kong’s estimated fiscal deficit in 2020–2021 will likely increase to about HK$290 billion (US$37.4 billion), or 10 per cent of GDP. Yet with HK$1.1 trillion (US$141.9 billion) in fiscal reserves, Hong Kong has the fiscal space to manoeuvre without resorting to debt financing.

Third, Hong Kong’s economy is driven by four key industries. These are financial services, tourism, trading and logistics, and professional and producer services, which together contribute around 55 per cent of GDP and 45 per cent of employment. Yet, the pandemic hit these industries asymmetrically. Financial services and professional services were less affected as they were less reliant on face-to-face contact. Tourism and trading and logistics were hardest hit. A targeted stimulus package ensures more bang for the government’s buck and makes the economic consequences of the pandemic less unequal.

In the third quarter of this year, Hong Kong’s economic output recovered to just 3.5 per cent below last year’s output. Policymakers’ response to the COVID-19 shock is one reason behind the robust rebound. Hong Kong society has been flexible and disciplined in this period. Many businesses have adopted a work-from-home model, made possible because Hong Kong had the necessary technological infrastructure already in place when the pandemic hit.

Another reason for the economy’s rebound is the self-discipline of citizens. With the precedence of the 2003 SARS outbreak, most citizens are vigilant with personal hygiene. There was virtually no opposition to compulsory mask wearing. The number of COVID-19 cases per day has never exceeded 150. A heavy-handed lockdown was never needed.

Yet full reactivation of the Hong Kong’s economy remains highly uncertain. A positive sign is that mainland China’s economy has mostly reopened. Mainland China is both Hong Kong’s largest destination of goods exports and supplier of goods imports. As trade and cross-border communications gradually normalise, the ‘internal circulation’ of production, distribution and consumption will be a major boost to Hong Kong’s economy.

Still, the recovery will not be complete without the ‘external circulation’ of tradeable goods and services with the rest of the world. A sizable fraction of Hong Kong’s business comes from the United States, Europe and the rest of Asia. But reopening will be slow as a surge in infection numbers around the world and uncertainty around vaccine timelines suggest that there is still a long way to go. Hong Kong’s travel bubble with Singapore, for example, was postponed due to a domestic COVID-19 spike in Hong Kong.

Hong Kong also faces long-term problems around social cohesion post-COVID-19. In June, China’s National People’s Congress Standing Committee passed the Hong Kong National Security Law. The law aims to safeguard national security, preserve ‘one country, two systems’ and restore stability. But it has been met with discontent in the West. US President Donald Trump responded by signing the Hong Kong Autonomy Act which imposes sanctions on individuals and entities for ‘contributing to the erosion of Hong Kong’s autonomy’. He also ended Hong Kong’s special trade status under US law.

It is hoped that Hong Kong’s status as an international financial, transportation, trade and aviation hub — and its renowned professional services — will facilitate and support the development of China’s Greater Bay Area. Yet, given the latest political developments in Hong Kong, the big question is whether the rest of the world and international business community will buy-in.

So far, there has been little capital flight, strong demand for the Hong Kong dollar and no significant exodus of local or international talent. Yet it remains unclear how changing politics will impact Hong Kong’s attractiveness as a business and financial centre in the long run.

This article was first published by the East Asia Forum.