Coronavirus Nightmare: The Pandemic Has Been a Bonanza For Human Trafficking 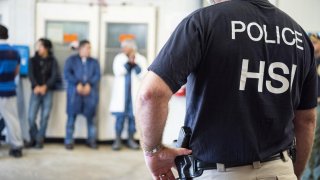 The sexual exploitation of women and children has likely increased amid the COVID-19 pandemic, experts say.

Groups such as Polaris and International Justice Mission work to fight human trafficking and to free the estimated 40 million victims of modern-day slavery. Their work has not slowed down during the global pandemic.

Sadly, experts say, the virus is leading to an increase in violence against women and children.

Polaris operates the National Human Trafficking Hotline, which exists to connect victims of sex or labor trafficking with resources to help them find a way out of the abuse. The hotline also serves as a tip line to prevent future trafficking cases.

The hotline has received more than 48,000 calls or texts from individuals asking for help this year alone. Polaris has documented more than 63,000 cases of human trafficking within the U.S. since 2007.

Beiser said the coronavirus actually has created a climate for human traffickers to exploit the most vulnerable. A recent study, conducted by his group, found that crisis trafficking situations rose by 40% in April of this year compared with the numbers for April 2019.

“The real concern for most anti-trafficking professionals is, when people are out of work or unable to work, when they are not stably housed, when they don’t feel that they can get safety when they need it, that is when trafficking flourishes,” he said.

In June, the State Department released its “2020 Trafficking in Persons Report,” in which Secretary of State Mike Pompeo wrote, “While urgency has always marked the fight against human trafficking, the implications of the COVID-19 pandemic have magnified the need for all stakeholders to work together in the fight more than ever.”

Buyers’ demand for sex does not appear to have lessened during the pandemic. “Theoretically, right now, when people are sheltering in place and quarantining, men should be less likely to go out and buy sex from a stranger who could be trafficked,” Beiser said. “What we are actually seeing online, where a lot of sex trafficking is facilitated, is men still writing that they are going out and buying sex.”

International Justice Mission, a nonprofit founded in 1997 by human rights attorney Gary Haugen, also sees the coronavirus as a threat to the planet’s most at-risk populations.

He added, “We are seeing, country by country, where we work to protect women and children from violence, massive spikes in sexual assault [and] intimate-partner violence as they are locked in homes and neighborhoods with predators and abusers.”

With people all over the world stuck at home, Langford said, his organization is seeing a rise in the online exploitation of trafficking victims.

“The online sexual exploitation of children is this new, sinister form of cyber sex trafficking that has really spread like a wildfire in a dry field with the proliferation of the developing world,” Langford said.

The accessibility of the internet and modern technology has made digital exploitation a major issue in areas rich and poor alike. The Philippines is one such nation where online sexual exploitation has rapidly increased in recent years, he said.

“If you are a cyber sex trafficker in the Philippines, all you need is a cheap internet connection, which is easy to get. You need a cheap webcam or a cellphone, and just some sort of electronic payment method, and then you are up and running, able to sell to predators and abusers around the world,” he said.

Polaris’ Beiser warned that individuals who are purchasing pornography during COVID-19 could “be watching rape or trafficking, and there is no way that they could know that.”

“For people who are watching a live webcam of sex, there might be a person off-camera who is making that situation happen,” he said.

The threat of forced labor is also a concern. “The modern form of slavery these days is often to lure people into slavery by an advance of money,” Langford said.

“There is deception. There is coercion,” he said, explaining that the money upfront is really just the “bait to lure people into a situation of slavery, where you are not allowed to leave.”

Labor trafficking is a concern even in America, especially during COVID-19. “People who can’t work from home, because they don’t have the type of job that’s economically flexible enough that they can do that … those are the people who would be more likely [to be] exploited for labor trafficking,” Beiser said.

The enslavement or trafficking of individuals are “crimes of opportunity,” Langford said. “Traffickers and slave owners are not brave people. They prey on the weakest.”

Amid the rise in violence and opportunity for exploitation during the coronavirus pandemic, experts remain optimistic that COVID-19 will bring increased attention to the human trafficking crisis.

“This might be an opportunity where we can really look at some of the vulnerabilities that we know people who are being trafficked are experiencing and think about how we can do things upstream to try to have support available for the people we know are most at risk,” Beiser said.

This article by Virginia Allen, @Virginia_Allen5, and 1 comment first appeared in The Daily Signal on July 28, 2020.