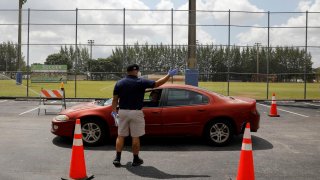 Congress is currently discussing the fate of the $600-per-week federal unemployment bonuses set to expire this week. A key Republican objection has been the bonuses’ resulting in many unemployed workers collecting more in benefits than they earned from work, creating an obvious disincentive to return to work. One study found two in three current recipients receive more on benefits, and another estimated five in six would receive more on benefits if the current $600 bonuses are extended into 2021, as the Democrat-led House has proposed. Meanwhile, other Democrats like Connecticut Governor Ned Lamont admit the bonuses “discourage work,” and should end.

But even if Congress doesn’t extend the $600 bonuses, unemployment benefits will continue to exceed paychecks for many recipients. The reason involves the design of the federal Pandemic Unemployment Assistance (PUA) program, created in the same March 2020 legislation authorizing the $600 bonuses. PUA is an unprecedented federal program operating through December 2020 that pays benefits to individuals who would not typically qualify for state unemployment insurance (UI) benefits. Significantly, PUA guarantees a minimum benefit equal to at least half the average weekly UI benefit recently paid in a recipient’s state. As shown in column (3) of the table below, among the 50 states, this PUA minimum benefit ranges from $106 per week in Mississippi to $267 in Massachusetts.

As the law creating PUA notes, its intended recipients include anyone who “does not have sufficient work history, or otherwise would not qualify for regular unemployment or extended benefits under State or Federal law.” Even individuals with no prior work are eligible; for example, PUA is payable to someone who “was scheduled to commence employment and does not have a job or is unable to reach the job as a direct result of the COVID-19 public health emergency.” The latest Department of Labor (DOL) guidance on PUA adds that “unemployed” Peace Corps volunteers are eligible for PUA.

Sources: https://oui.doleta.gov/unemploy/pdf/uilawcompar/2019/monetary.pdf and https://wdr.doleta.gov/directives/attach/UIPL/UIPL_03-20.pdf (which DOL separately states must be used to calculate minimum PUA benefits.) HQ = “high quarter.” DOL defines “base period” as “the time period during which wages earned and/or hours/weeks worked are examined to determine an individual’s monetary entitlement to benefits. Almost all states use the first four of the last five completed calendar quarters preceding the filing of the claim as their base period.”
Figures in column (2) rounded to the nearest whole dollar.

Compared with column (2), column (3) shows how in every state except Arizona, the minimum weekly PUA benefit is greater than the highest average weekly wage that would make a payroll employee eligible for PUA (that is, the level just below the minimum needed to qualify for UI). In effect, the table shows that nearly every payroll employee currently on PUA (along with everyone on PUA who did not work before) collects more in PUA benefits than they previously earned from working — even without the current $600 bonus added on top. Often, the PUA minimum benefit is several times what they previously earned from work.

How many people fall into these categories? It’s hard to say, as data breaking down PUA recipients are currently unavailable (and even the true total PUA caseload is currently unknown, since “continuing claims” data often include backlogged weeks of benefits). But we know there have been more than 9.5 million initial claims for PUA benefits filed through June 27, so the number could be significant. Many current PUA recipients are gig workers and independent contractors, who could qualify for more than the PUA minimum benefit if they had significant past earnings. But many other PUA recipients are likely part time or seasonal employees with very limited prior earnings, including students and second earners. For them, PUA benefits — which are currently payable for up to 39 weeks per person — exceed what they previously earned from working, even without the $600 bonus.

This article by Matt Weidinger first appeared in AEIdeas on July 22, 2020.

Image: A worker controls the traffic as people in cars wait in line to pick up receiving an unemployment forms, as the outbreak of coronavirus disease (COVID-19) continues, in Hialeah, Florida, U.S., April 8, 2020. REUTERS/Marco Bello.