Could This Be Russia's New PAK DA Stealth Bomber? 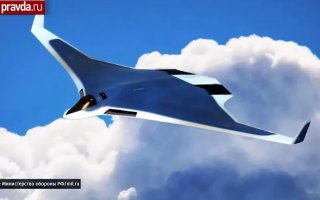 Key Point: Much of the bomber's actual technical sophistication remains a mystery.

Russia has reportedly begun construction of its next-generation PAK DA stealth bomber as part of an apparent strategic effort to usher in a new era of stealth bombing technology. Moscow hopes to get ahead of the U.S. Air Force’s emerging B-21 stealth bomber and China’s H-20 strategic bomber.

A report in the Russian News Agencies’ TASS says the first prototype is expected to be finished by the end of next year. Later, more prototypes are slated to be ready for testing by April 2023, something which puts the bomber’s production schedule on roughly the same anticipated timeframe as the U.S. B-21.

Interestingly, its configuration seems to parallel elements of the U.S. B-2 and emerging B-21 bombers, with some key differences. Of course, its horizontal blended wing-body shape is to be expected for these kinds of stealthy platforms, yet available renderings of the PAK DA show rectangular-shaped inlets aligned with or somewhat parallel to the top of the fuselage.

This might explain why the Air Force B-21’s inlets are even more indented and rounded than the B-2, and the new B-21 bomber does have a smaller or more blended incline between the fuselage and wings. Granted, protruding configurations of any kind, if even rounded or covered in a radar-absorbing exterior, are more likely to generate some kind of radar “ping” return from ground-based air defense systems. Vertical structures and uneven contours are therefore more likely to generate radar returns, as electromagnetic “pings” will discern the differences in shape.

The concept with these kinds of stealth bombers is to not only elude surveillance radar systems but also evade higher-frequency, more precise engagement radar, ensuring that the platform will not only be difficult or impossible to hit, but also remain completely undetected. The idea is for adversaries to “not even know something is there.” A stealthy platform can succeed by appearing as a “bird” or “insect” to enemy radar.

The back of the PAK DA does appear somewhat analogous to early models of the B-21 in that there appears to be little or no protruding external exhaust or heat release area; such a configuration does seem to suggest that perhaps some newer kind of internal heat dissipation or cooling technology has been discovered and applied as part of an effort to minimize heat signature.

Some reports say the PAK DA may place Russia as the global leader in stealth bomber technology, however much of its actual technical sophistication may remain a bit of a mystery. One area in which Russia may have an advantage in is the area of air-launched weapons, as the TASS report says. “The PAK DA is expected to deploy Kh-102 nuclear tippled stealthy cruises missiles, and a number of newer hypersonic designs including derivatives of the Kh-47M2,” the TASS story writes.

That being said, the U.S. B-21 is slated to deploy with a new, high-tech Long-Range Stand-Off (LRSO) weapon, a conventional or nuclear-armed cruise missile reported to be the most advanced in the world. Now in development by the U.S. Air Force, the LRSO is expected to bring new dimensions to cruise missile attack possibilities by introducing longer ranges, advanced guidance systems and new weapons’ payload options.