Could China Soon Close the Military Gap With the West? 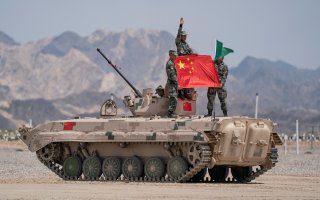 Key Point: China’s People’s Liberation Army (PLA) is on track to become the dominant force in the Asia-Pacific.

In an article from the Brookings Institution titled “China’s Hollow Military,” writers Bates Gill and Michael E. O’Hanlon pondered the question, “how good is China’s military, and how much should the United States care?” The two noted that Beijing launched missiles near the Taiwanese coast, while the People’s Republic of China (PRC) made claims on islands that were hundreds of miles from its shore.

Gill and O’Hanlon added, “The PRC, then, has demonstrated a number of intentions and aims that warrant close American attention. The ongoing dispute over Taiwan, for example, is ripe for troublesome misperception.”

However, what is especially noteworthy is that this article wasn’t published this past June, but rather on June 1, 1999. In other words, the question of China’s military capability has been one that has been asked for many years. Yet, there is a final important take away from Gill’s and O’Hanlon’s piece, “China remains a developing country, with per capita income levels—even after twenty years’ growth of historic proportions—only about one-tenth those of the West. China’s living standards trail even those of American adversaries such as Iran, Yugoslavia and pre-Desert Storm Iraq.”

It might be unfair to consider China a developing country in 2020. It now has the second-largest economy in the world and the fastest-growing multi-trillion-dollar economy. According to NASDAQ figures, China had a GDP of $14.14 trillion in 2019 and made up 16.38% of the global economy.

More ominously for the West is the fact that China’s People’s Liberation Army (PLA) has been on a track to become the dominant force in the Asia-Pacific. Since President Xi Jinping came to power, he has championed the “Chinese Dream,” a vision to restore China’s great-power status and this has included producing a world-class force.

The goal is to dominate the Asia-Pacific and to “fight and win” global wars by 2049.

It is well on its way, at least in terms of the size of the army and the amount spent on defense.

According to a new report from The EurAsian Times, the PLA is now the world’s largest active military force and it has 2.03 million active and 510,000 reserve personnel—a dramatic increase from its founding in 1927 when it had less than 200,000 troops.

China’s published military budget has also steadily increased since 1999 when the Brookings Institution study was published. At the time, the PLA’s budget was barely $15 billion, and by 2012 it reached $115 billion according to GlobalSecurity. China’s published 2020 military budget is forecast to increase by 6.6% and reach $178 billion—and it should be noted that unofficial estimates expect the actual spending to exceed those numbers.

Another consideration is that while Beijing’s military budget has increased since the 1980s, it has accounted for less of a percentage of the nation’s GDP.

While the numbers may seem portentous or even menacing to the West, context is required.

First, the China’s People’s Liberation Army Navy (PLAN) likely won’t reach naval dominance in the next decade and, even if it does, it could face a coalition of naval powers. China has two aircraft carriers, with a third under construction, but the U.S. Navy has eleven.

The PLAN is able to conduct a number of growing operations in more-distant waters, including the Western Pacific and the Indian Ocean. However, it has few overseas naval bases and again lacks partners of the type that allow the U.S. Navy to operate almost anywhere in the world.

Even with smaller warships, including destroyers and frigates, China has been playing catch-up for decades. It could likely close the gap and build a powerful “blue water” navy, but that will require more money to maintain it.

One other consideration is that the PLA and PLAN may look like a strong force, but it has suffered from a serious weakness. Few of its soldiers and sailors have any combat experience. As S. Desai, a research analyst for the China Studies Programme told The EurAsian Times, “PLA is accused of being infected by the peace disease (Hépíngbìng), peacetime habits (Hépíngjixí) and peace problems (Hépíngjibì), as it has not participated in any war since 1979. This is a condition where a soldier’s casual peacetime approach while training could impact wartime combat readiness.”

President Xi has introduced changes that call for the PLA to train under “realistic combat conditions,” but that is no substitute for actual battlefield experience.

The other, and potentially greater, weakness that Desai noted was that the modernization programs can’t make up for the quality of the personnel employed. The PLA has improved its recruitment techniques to focus on better-qualified students, but current Chinese “recruitment” is still too similar to old-school, Western-style conscription methods.

The final consideration is whether China’s long-term goal is actually to be able to project power throughout the world. The Chinese government has previously indicated it would never threaten any other country or seek any sphere of influence, but whether that remains true in the decades to come is one to watch. China’s neighbors are already watching and as noted, and as Beijing’s ambitions change, it may face a coalition to counter it.