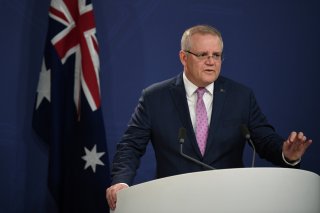 Here's What You Need To Remember: A nuclear-armed Australia makes drawing the country into a broader collective defense architecture much more feasible. Having a reliable U.S. ally in the Asia-Pacific with an independent nuclear deterrent strengthens nuclear deterrence in the Asia-Pacific overall. And it achieves these objectives without fatally weakening nuclear non-proliferation efforts more broadly.

Over the past century, Australia has been America’s most dependable military ally. In every major U.S. conflict, including World Wars I and II, Korea, Vietnam and Iraq, Australians have fought alongside.

Yet as competition between China and the United States heats up in the Western Pacific, Australia is cautious not to provoke its greatest trading partner. When it comes to a potential U.S.-China conflict, Australia is doing all it can to keep its options open – and with good reason.

Australia is highly vulnerable to long-range missile attack, including those carrying nuclear payloads. Despite Australia being a continental power, almost all its population is concentrated in a half-dozen major cities — easy targets for small numbers of warheads.

In a high-intensity conflict between the United States and China, it is conceivable that China may target Australia with long-range nuclear missiles as a step up the escalation ladder, demonstrating to the United States its capacity, and willingness, to conduct nuclear strikes over intercontinental ranges.

In this eventuality, extended nuclear deterrence would hardly be credible. Retaliating on Australia’s behalf would demonstrably mean accepting large-scale nuclear attack by China on the continental United States.

For this reason, many Australians believe entering into conflict with the world’s most populous nuclear power, for any reason and under any circumstance, is unthinkable – despite very strong support for the Australia-U.S. alliance overall. The most effective means for Australia to insulate itself from long-range nuclear attack is to develop or acquire its own reliable long-range nuclear deterrent.

Many would consider this a bad idea. If Australia (a non-nuclear weapon state party to the NPT) went nuclear, conventional wisdom suggests it very difficult to dissuade Japan, South Korea and others from following suit, critically threatening the nuclear non-proliferation regime as a whole.

This view is fundamentally flawed. In actuality, Australia has a very unique legal status with regard to nuclear weapons.

At present, there are five Nuclear-Weapon States under the NPT (United States, Russia, United Kingdom, France and China). Under Article IX.3 of the NPT, a country may accede to the treaty as a Nuclear-Weapon State if that state “manufactured and exploded a nuclear device prior to January 1, 1967”.

Australia qualifies. In the 1950s and ’60s, Australia hosted a series of nuclear tests conducted by the United Kingdom. These nuclear explosions were conducted on Australian sovereign territory with the active participation of Australian scientists and military personnel.

These tests received financial support direct from the Australian government, with at least some explosions likely to have used fissile material that had been sourced locally from within Australia. No other non-nuclear weapon state party to the NPT is in this category.

As Rod Lyon of the Australian Strategic Policy Institute sharply has observed from recently declassified documents, Australian negotiators were very much cognizant of this legal basis prior to Australia joining the treaty. In sum, if Australia determined it was a national security imperative to develop an independent nuclear deterrent, it would be legally entitled to do so.

As this legal status does not apply to America’s other allies in the Asia-Pacific, a changed nuclear status by Australia under the NPT would not automatically undermine the treaty as a whole.

A nuclear-armed Australia is likely to confer a number of strategic advantages upon the United States. It strengthens Australia’s resolve in supporting the United States in a potentially open-ended strategic contest in the Asia-Pacific. It supports extended nuclear deterrence by removing a potentially vulnerable element of the policy, and the nations in Southeast Asia will see Australia as a more capable strategic partner and deepen cooperation.

There’s more. A nuclear-armed Australia makes drawing the country into a broader collective defense architecture much more feasible. Having a reliable U.S. ally in the Asia-Pacific with an independent nuclear deterrent strengthens nuclear deterrence in the Asia-Pacific overall. And it achieves these objectives without fatally weakening nuclear non-proliferation efforts more broadly.

The United States should publicly recognize Australia’s right to nuclear weapons under the NPT. This does not mean that Australia will immediately seek to acquire such weapons.

Australia has a strong non-proliferation record and a long history of disarmament activism. In the short-term, Australia would use this recognition to leverage its position in present nuclear arms control negotiations, further persuading countries in the region to exercise nuclear restraint.

Regardless of Australia’s future nuclear choices, just acknowledging the legal reality of Australia’s unique status under the NPT supports America’s long-term strategy in the Asia-Pacific. The U.S. government should do so as a matter of priority.