Could This Coup Against Hitler Have Worked? 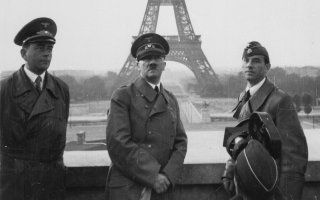 Here’s What You Need to Remember: London wanted to avoid starting a war and so did not back anti-Nazi elements of the German military. Could they have succeeded if they had chosen otherwise?

Many accounts have been written about the peace mission flight of Deputy Führer Rudolf Hess and his parachute landing in a farm field in Scotland in May 1941 to discuss with the Duke of Hamilton a proposal to end hostilities. Hess was also Reich minister without portfolio and leader of the Nazi Party, among other titles. He piloted his own plane from Augsburg and bailed out over the duke’s estate.

In sharp contrast, very little is known about the secret mission to England by Baron Ewald von Kleist-Schmenzin that preceded the one by Hitler’s henchman. At the behest of the head of the Abwehr (German intelligence), Admiral Wilhelm Canaris, this Prussian nobleman met in mid-August 1938 with Lord Lloyd, chairman of the British Council; future prime minister Winston Churchill, a vocal critic of the current British government; and Sir Robert Vansittart, an ardent antiappeaser in the Foreign Office. This clandestine operation was orchestrated by the Abwehr as the German military’s anti-Hitler resistance movement sought British support of the German General Staff’s plan to mount a coup d’état against the Nazi regime as the Czechoslovakian crisis was escalating.

Ewald von Kleist-Schmenzin was born on March 22, 1890, in Pomerania and had all the trappings of a typical Junker, which included owning a vast tract of land beyond the Elbe River. He was a political conservative who was an active participant in the German National People’s Party. He also supported the concept of a return to a monarchy and harbored devout Christian ideals. In the decade of 1923-1933, he was a staunch opponent of Nazism before Hitler assumed dictatorial power. In 1929, he published a manuscript on the dangers of National Socialism, thereby allowing him to take a prominent place in the ranks of the opposition to Hitler. In 1934, his political party was disbanded by Hitler; however, he still had a prominent place among Germany’s industrialists and entrepreneurs. After 1934, all opposition political parties, the Catholic Church, the Wehrmacht, the financial and industrial sector, and the entire apparatus of the government became dominated by Hitler.

Although seeming very odd at first glance, Admiral Wilhelm Canaris greatly admired Kleist-Schmenzin’s courage and political convictions. Secretly, Canaris was dubious about the future of the Third Reich, and he recruited the baron into his unofficial intelligence network. The Abwehr director believed that war should be avoided at all costs, and Kleist-Schmenzin had strong connections with England, especially, among some journalists. One such journalist was Ian Colvin, a biographer of Vansittart who worked for the London News Chronicle. Kleist-Schmenzin met Colvin in July 1938 to ask him if he thought Britain would fight in defense of Czechoslovakia.

The German resistance movement began to plan for an envoy to Britain in April 1938. In May, Canaris knew of Hitler’s plan for an invasion of Czechoslovakia, and the opposition needed to know if the British would come to the defense of the Czechs. A member of the German General Staff said, “If the Allies energetically alert Hitler to the fact that they will oppose any aggression against Czechoslovakia, or any intervention whatsoever, then Hitler is certain to pull in his claws.”

“Our Visitor from Germany has just Arrived”

At this juncture, Canaris introduced Kleist-Schmenzin to General Ludwig Beck, head of the German General Staff, who was an active conspirator and in need of aligning the Western Allies against the Nazi regime and its intentions to seize Czechoslovakia by force. Beck was soon to resign—in early August 1938—as a protest against Hitler’s plans.

In the meeting among Canaris, Kleist-Schmenzin, and Beck, the general said, “If the British allow Hitler freedom of action, they will be losing their two principal allies in Germany: the General Staff and the German people. If you can bring back some concrete proof that Great Britain will go to war in the event of aggression against Czechoslovakia, then I will put an end to this regime.”

All that remained now was for Canaris to get the baron to England without the knowledge of either the Gestapo or Britain’s Secret Intelligence Service (SIS). On August 13, 1938, Canaris informed Kleist-Schmenzin of his plans for the clandestine trip to London. Canaris had provided Kleist-Schmenzin with a false passport.

On August 18, the baron boarded a Lufthansa Junkers-52 that would carry him to the British capital. Accompanying the baron was an Englishman, H.D. Hanson, who solicited the customs officers at Croydon airfield to let the “civilian in the gray suit” pass without interference. Hanson then notified the SIS, “Our visitor from Germany has just arrived.”

Kleist-Schmenzin’s message to Vansittart was simple. Hitler was planning to invade Czechoslovakia in mid- or late September. If Britain made it public that it was prepared to go to war with the Nazi dictator, even at the risk of starting another world conflagration, Hitler would have to shelve his plan or, perhaps, even be overthrown by anti-Nazi German officers, who would then form a new government.

Kleist-Schmenzin assured Vansittart that he spoke for “all the generals in the German Army who are friends of mine. They are all dead against war, but they will not have the power to stop it unless they get encouragement and help from outside. As I have already told you, they know the date and will be obliged to march at that date.”

Vansittart asked which date it was, and in a rare moment of laughter between the two men, Kleist-Schmenzin responded, “Why of course you know it. Well anyhow, your prime minister knows it. After the 27th September.”

As the ill-defined chief diplomatic adviser, Vansittart maintained contact both with British opponents of Chamberlain’s appeasement policy and with anti-Nazi opponents in Germany. Out of protocol and loyalty, Vansittart briefed both Lord Halifax, the foreign secretary, and Chamberlain about Kleist-Schmenzin’s mission. In his letter to Halifax, Vansittart noted Kleist-Schmenzin’s observations concerning Nazi Foreign Minister Joachim von Ribbentrop.

“Herr von Ribbentrop keeps telling him [Hitler] that when it comes to the showdown neither France nor England will do anything,” he said.

He also informed Halifax that Kleist-Schmenzin’s recommendations for stopping the invasion of Czechoslovakia were twofold. “Firstly, since Hitler now believes that the attitude of France and England in May was entirely bluff, you must make him understand that this is not the case,” he said.

Kleist-Schmenzin’s second recommendation was, “A great part of the country [Germany] is sick of the present regime and even a part that is not sick of it is terribly alarmed at the prospect of war, and the conditions to which war will lead them. I have already told you that the army, including [Field Marshal Walther] Reichenau, is unanimous against it if they can get any support. I wish that one of your leading statesmen would make a speech which would appeal to this element in Germany, emphasizing the horrors of war and the inevitable general catastrophe to which it would lead.”

At the conclusion of his meeting with Vansittart, Kleist-Schmenzin added, “There was no prospect whatever of any reasonable policy being followed by Germany as long as Hitler was the head of affairs but … if war was avoided on this occasion, it would be a prelude to the end of the regime and a renascence of a Germany with whom the world could deal.” Lord Halifax sent the Vansittart memorandum over to the prime minister.

After the meeting with Vansittart, Kleist-Schmenzin arrived at the Park Lane Hotel on the evening of August 18. Kleist-Schmenzin met with Lord Lloyd, chairman of the British Council and former high commissioner in Cairo, and they dined at Claridge’s that night. Lord Lloyd was receiving information from his contacts that elements within the German General Staff were becoming more threatened about Hitler’s bellicose ambitions. Lord Lloyd spoke no German, Kleist-Schmenzin no English, so they conversed in French. Kleist-Schmenzin made it clear to Lloyd that the mobilization plans for the Czechoslovakian invasion were all in place. Lord Lloyd, too, wrote a memorandum of his meeting with the baron to Halifax.

The next day Kleist-Schmenzin arrived at Chartwell to meet with Winston Churchill. Randolph Churchill, Winston’s son, took notes as the baron and the backbencher conferred. On the previous day, Churchill had warned in the London Daily Telegraph that any German attempt to crush Czechoslovakia would ultimately involve “all the greatest nations of the earth.” Churchill repeated this warning to Kleist-Schmenzin, who asked for a letter from Churchill to be given to the German General Staff.