Could D-Day Have Been Pulled Off a Year Earlier? 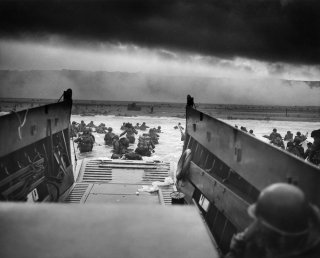 Key Point: In hindsight, it made sense to postpone the operation until 1944.

On June 6, 1944, the Allies unleashed on land, air, and sea the largest invasion force in world history in an enormous effort to liberate Europe from Nazi tyranny. Code-named Operation Overlord, the invasion consisted of five divisions, more than 7,000 ships and landing craft, and 195,000 naval personnel from eight countries. The massive invasion of the European continent included 133,000 troops from the United States, Great Britain, and Canada.

An invasion of Nazi-held Western Europe had been considered as early as 1943, but the decision to delay the cross-Channel operation and conduct the peripheral strategy advocated by the British was perhaps the defining strategic decision of World War II. More than six decades have passed, and speculation still remains whether the Normandy invasion could have been conducted a year earlier, thereby securing a German surrender sooner.

In hindsight, historical and strategic considerations seem to fully justify postponing the Normandy invasion from 1943 to 1944. Only in 1944 had three fundamental objectives for a cross-Channel invasion been achieved. The Allies had agreed on a coherent, viable strategy. They had achieved peak strength in terms of combat experience, naval and air supremacy, military intelligence, and logistical readiness. It had also been decided that the German war machine had been sufficiently weakened.

Although the potential rewards of a 1943 cross-Channel invasion in 1943 were significant, it is conceivable that such an operation would have proven premature, exposing Allied forces to unacceptable levels of risk with an array of potential outcomes that could prove catastrophic.

The 1943 cross-Channel invasion of the European continent proposed by General Dwight D. Eisenhower, supreme Allied commander, and General George C. Marshall, chairman of the Joint Chiefs of Staff, attracted support with the plan’s straightforward logic. Eisenhower and Marshall developed a plan that would require a concerted effort to determine the nature of the war prior to mobilizing forces.

Two main assumptions dominated their approach. First, it had previously been decided that the European Theater would take priority over the Pacific. Second, the initial engagement of the campaign to liberate Europe required a decisive blow against the Germans. The timing and location of the invasion, therefore, became the predominant considerations of American strategy.

In 1941, justifying a 1943 invasion of Europe hardly seemed necessary. The American planners argued that Europe’s increasingly desperate situation mandated an early cross-Channel invasion. Indeed, the Soviet Red Army was in danger of collapse under the weight of the Nazi juggernaut on the Eastern Front. American planners were convinced that opening a second European front offered the best chance to defeat Germany and avoid a protracted war in Europe.

The appeal of such a 1943 invasion strategy was enhanced by its basis in a distinctly American way of waging war: seizing the offensive, concentrating forces at the decisive place and time, and attacking from a secure base along the shortest lines of communication. The wisdom of such a strategy, embodied in an operation code-named Roundup, could hardly be disputed.

The only alternative offered was a British strategy of peripheral, nondecisive operations and slow attrition. Winston Churchill advocated the conduct of such peripheral operations in Africa and the Mediterranean.

Both plans were framed in a long debate that rendered them distinct and mutually exclusive. Proponents of a 1943 invasion feared that a peripheral strategy in a nonessential theater would sway the Allies from the war’s main strategic objective, victory in Europe. The resulting diversion of crucial resources from a concentrated effort in Europe, they argued, would at the very least prolong the war or cause it to end in a stalemate. Critics of the peripheral strategy were quick to label it as speculative “wait-and-seeism” and as merely “doing something for the sake of doing something.”

Perhaps more scathing and divisive were the allegations of British political opportunism, asserting that the underlying motives for such a strategy were to relieve endangered British colonial enterprises along Europe’s Nazi-occupied periphery. Most compelling, however, was the argument that American public opinion could not be buoyed with a strategy that would ultimately prolong the war in Europe. An incidental perception that emerged from the “Europe First” strategy was that prolonging the war in Europe was also synonymous with postponing the war in the Pacific. Taking this passive course was more and more unpalatable to the U.S. Congress and to the people whose memories of Japan’s attack on Pearl Harbor were still fresh

Anticipating an inevitable Allied invasion, Germany began to prepare its defense in depth. The urgency of the situation was reflected in Field Marshal Erwin Rommel’s assignment as the new commander of Army Group B in France. Upon taking command in November 1943, Rommel inspected France’s coastal defenses and reported, “The Army forces were barely adequate for a vigorous defense, the Luftwaffe and Navy very weak. There was no uniform defense plan … almost every commander had his own ideas, not always very clear on how to defend his area.”

In 1943, the German Army was fully engaged on the Eastern Front with the Battles of Stalingrad and Kursk. German planners would have been extremely hard-pressed during this period to quickly shift reinforcements to a western front. Facing harsh reality, Rommel directed preparations on a grand scale and at a frenetic pace. The Germans came to refer to the period between 1943 and 1944 as the “Days of Improvisation.” The scale of this Axis endeavor is best illustrated by considering that in the spring of 1943 there were 29 German divisions in northern France. Only a year later, the Allies faced 56 divisions on what was described as the most heavily defended coastline in the world.

A compelling argument can be made that a 1943 invasion would have enabled Anglo-American forces to reach Berlin by 1944, liberating Eastern Europe well before the Soviet Red Army would have been able to advance as far to the west as it ultimately did. Given the weakness of Rommel’s Atlantic Wall prior to 1944, it can also be argued that a 1943 cross-Channel invasion would have sustained fewer casualties in the Allied drive to Berlin.

Proponents of a 1943 invasion also assert that the creation of a western front in 1943 would have placed the Americans and British in a far stronger postwar negotiating position. By providing the Western Allies more favorable geographic zones of occupation at the end of the war, a 1943 invasion could have preempted one of the underlying causes of the Cold War.

These arguments, however, seem to ignore the Allied concerns that Stalin might accept a separate peace with Germany as Lenin had done in 1917. This possibility provided a dark backdrop for the British and American strategic debate. Since 1942, the Russians had been urging the British and Americans to open a second front to relieve their beleaguered army in the east. If the Soviet Union were to sign a separate peace settlement with Germany, any attempted cross-Channel action would be quickly rendered suicidal. Launching the invasion sooner rather than later, the American planners argued, was required to ensure Russia continued to occupy Germany’s 157 divisions on the Eastern Front. Delaying a cross-Channel invasion would only serve to further alienate the Soviet Union.

Churchill Argued That an Early Cross-Channel Invasion Would Lead to “a Channel Full of Corpses.”

The British desire to conduct a peripheral strategy against Germany was founded on a deeply rooted desire to maintain the will of the British people. This strategy was most certainly regarded as a desperate struggle for national survival. Likewise, Britain’s recent memory of its overwhelming casualties during World War I was also a dominant concern. No one could deny that the risks of a 1943 invasion would have to be borne by a predominantly British invading force.

During General Marshall’s final attempts to persuade Churchill to accept the Roundup plan, one of Churchill’s closest advisers, recognizing the futility of the general’s efforts, remarked to him, “It’s no use—you are arguing against the casualties on the Somme.” Indeed, throughout this period of debate, Churchill vowed to avoid a repeat of the British tragedies at Paschendaele, Dieppe, and Dunkirk. As a result, Churchill employed an array of fatalistic imagery to argue against an early cross-Channel invasion, warning Roosevelt at one point that the result of such a strategy would be “a channel full of corpses.”

The British were well aware of how quickly amphibious operations could go wrong, given the disastrous results at Gallipoli during World War I. The British leadership would eventually point out that lessons learned from such battles were largely responsible for the success of the invasions of North Africa, Sicily, and the Italian mainland in the autumn of 1942 and the summer of 1943.