Could Evangelicals Turn Away from Donald Trump? 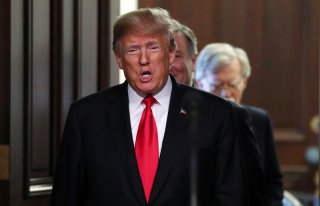 It has long been taken for granted that the majority of evangelical Christians in the United States will vote for Donald Trump.

That may well be the case. But there are recent signs that fewer evangelicals will support Trump this time around than in 2016.

Meanwhile, a Pew survey on Oct. 13 found that white evangelical support for Trump had slipped since August, from 83% to 78%.

Among those who plan to vote to reelect the current president, “a majority are excited to get behind Trump, rather than being primarily motivated by a distaste for his opponent,” according to a write-up of the Pew survey in the prominent evangelical publication Christianity Today.

To me, this suggests not so much a softening among evangelical voters an intensification of their feelings about Trump. I believe we are witnessing a growing divide between those who love him and those who increasingly question whether he is fit for office. Unlike in 2016, evangelical voters who cannot get excited about Trump are seemingly finding it more difficult to vote for him.

There hasn’t been a lot of research into what is behind this trend. But as a moral theologian, I’m interested in the moral reasoning that some prominent evangelical Christians have put forward in recent months explaining why they won’t be voting for Trump. It seems that at least some are reconsidering the relationship between leadership and character.

Why the change of heart?

When Trump was campaigning in 2016, many Christians conceded that while they didn’t approve of his crude personality or his “immoral” lifestyle, they believed his policies – such as his promises to protect religious freedom and his commitment to overturning Roe v. Wade – were more in line with their religious beliefs than those of Hillary Clinton.

“We’re electing a president, not a pastor,” was a common refrain.

Evangelical Christians in the U.S. are not a monolithic voting bloc that supports conservative candidates. There has always been a politically progressive contingent among evangelicalism. Jim Wallis, founder of the left-leaning evangelical magazine Sojourners, for example, served as a member of President Obama’s Advisory Council on Faith-Based and Community Partnerships. Unsurprisingly, progressive evangelical voters have been critical of the president’s character as well as his policies.

But what appears to have changed of late is that some politically conservative evangelicals – those who prioritize abortion restrictions, opposition to same-sex marriage and religious freedom – agree less than they did in 2016 that Trump deserves their vote.

While President Trump may not be “pastor-in-chief,” many evangelical leaders are reminding their fellow Christians that they should not view the office of president as somehow exempt from what they perceive as biblical standards of leadership. As Christian business leader Sid Jansma Jr. explained in a recent article: “The Bible routinely associates good leadership anywhere with character, including such traits as justice, patience, compassion, humility, integrity, honesty, wisdom, courage and discipline.” Citing the Apostle Paul’s second letter to Timothy in the Bible, Jansma concludes, “On every Biblical count of leadership, all of the above, Trump fails.”

Prominent evangelical pastor and author John Piper has likewise drawn on several biblical texts when writing about the choice facing voters: “There is a character connection between rulers and subjects. When the Bible describes a king by saying, ‘He sinned and made Israel to sin’ … it does not mean he twisted their arm. It means his influence shaped the people. That’s the calling of a leader. Take the lead in giving shape to the character of your people. So it happens. For good or for ill.”

In this reading, the Bible does not have a category for a good leader with bad personal character. Nor does it seem to imagine that a nation can remain untainted by the perceived moral failures of its leaders.

The lesser of two evils?

In 2016, a considerable number of evangelicals strongly disapproved of Trump’s behavior but could not imagine voting for a Democrat. For these voters, the Democratic Party platform and its positions on abortion and LGBTQ rights was sufficient to render Trump the lesser of two evils.

Explaining this position in 2016, Wayne Grudem, a popular evangelical author and seminary professor, conceded in The Christian Post that the candidate was “egotistical, bombastic, and brash” but that he represented an “unusual opportunity” to defeat the “pro-abortion, pro-gender-confusion, anti-religious liberty, tax-and-spend, big government liberalism” that he associated with Hillary Clinton.

More recently, concern over Trump’s perceived exploitation of Christianity has been enough to change the minds of some voters. Some theologians have argued that he appropriates Christianity for purposes that are contrary to its teachings. Southern Methodist University’s D. Stephen Long went as far as to ponder in one article: “Should we call Donald Trump ‘antichrist’?”

So even for Christian voters who rely on a lesser-of-two-evils calculus, it’s not obvious that Trump deserves their backing. As Piper writes, “I find it bewildering that Christians can be so sure that greater damage will be done by bad judges, bad laws and bad policies than is being done by the culture-infecting spread of the gangrene of sinful self-exaltation, and boasting and strife-stirring.”

Even from a conservative evangelical perspective, the gains of a Trump presidency are increasingly being weighed against the losses. As the editor in chief of Christianity Today put it in an article calling for Trump to be removed from office: “If we don’t reverse course now, will anyone take anything we say about justice and righteousness with any seriousness for decades to come?”

Despite reportedly mocking Christians and their beliefs behind closed doors, Trump is seen by many evangelicals as God’s chosen candidate. The data, however, suggest a growing divide among evangelicals, with reluctant Trump voters becoming a thing of the past.

Most conservative evangelicals will vote for Trump and will do so enthusiastically. But a significant minority have seemingly concluded that he is in fact the worse of two evils, and they will either not vote or vote for a candidate who is not a Republican – perhaps for the first time in their lives.

Aquinas Institute of Theology is a member of the Association of Theological Schools.