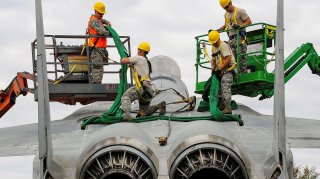 Here's What You Need To Remember: Boeing and Lockheed are competing with a host of foreign companies—and each other—to arm India.

U.S. arms-maker Boeing is considering pitching its F-15EX Eagle fighter to India. But some experts are warning the Chicago company not to get its hopes up for big international sales for the upgraded F-15.

New Delhi wants 114 new fighters to replace older Russian planes. Several types are in the running for the $18-billion acquisition, including the Saab Gripen from Sweden, the European Eurofighter Typhoon, the MiG-35 from Russia, Lockheed Martin’s “F-21” -- an unupgraded F-16 -- and Boeing’s own Super Hornet.

"While awaiting further definition on the Indian Air Force's requirements, we have requested a licence for the F-15EX so that we're ready to share the full spectrum of potential solutions across our fighter portfolio when appropriate," Boeing stated.

But Richard Aboulafia, an aerospace analyst with the Teal Group in Virginia, told Defense News the enhanced F-15 might be too expensive for the capabilities that it offers. Aboulafia said the F-15EX is a profitable product for Boeing. “But in terms of transforming the fighter business, not so much.”

India for years has been struggling to replace a large fleet of old, Russian-made warplanes. The Indian air force operates more than 200 1960s-vintage MiG-21s and recently retired scores of MiG-27s that were only slightly younger.

Some observers believe the Rafale is the favorite to win the 115-plane contract, as the Indian air force under a separate effort already has begun buying the type.

But Lockheed is lobbying hard for the contract. The Maryland company added some uniquely Indian systems to its latest, single-engine F-16V, rebranded the type the “F-21” and offered it to New Delhi as a low-risk, non-stealthy fighter that could serve as a bridge to the stealthy F-35.

"The F-21 has common components and learning from Lockheed Martin’s fifth-generation F-22 and F-35 and will share a common supply chain on a variety of components," Lockheed stated on its website on the morning of Feb. 20, 2019. A few hours later, that claim disappeared from the site.

The F-15EX is the latest version of the 1970s-vintage Eagle. It boasts a tougher airframe, better sensors and more weapons hardpoints than older Eagles do.

The U.S. Air Force in a surprise move in 2019 ordered the first eight of as many as 144 F-15EXs in order to replace the oldest of the service’s roughly 240 F-15Cs that fly air-superiority missions. Prior to the 2019 purchase, the last time the Air Force ordered an F-15, an E-model fighter-bomber, was in 2001.

The Air Force insisted the F-15EX purchase would not interfere with the service’s plan to acquire as many as 1,700 F-35s. The flying branch is buying F-35s at a rate of around 50 per year and standing up new squadrons as fast as it can train pilots and maintainers and build facilities. The Air Force could field as many as 300 F-35s by 2021.

Air Force leaders explained that acquiring F-15EXs in parallel to F-35 buys allows the branch more quickly to convert more squadrons to new planes. But the non-stealthy F-15EX actually isn’t cheaper to build than an F-35 is. Both types cost around $80 million per plane.

And that’s the F-15EX’s biggest weakness on the international market. Mark Gunzinger, an analyst at the Virginia-based Mitchell Institute for Aerospace Studies, told Defense News. “If you can get a real fifth-gen [stealth] capability for even a little more than what it would cost to sustain the F-15EX or other fourth-gen aircraft, then that’s a better deal.”

As long as India isn’t trying to buy a stealth fighter, the F-15 might have a chance. But if New Delhi takes seriously Lockheed’s implication that the F-21 could function as a bridge to the stealthy F-35, the F-15 might be at a disadvantage.