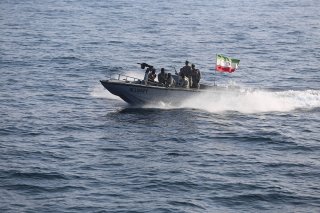 Here's What You Need To Remember: Pentagon officials have long expressed concern that small boat attacks could, for instance, could be used by Iranian forces to stop the flow of naval traffic through the dangerous and narrow Strait of Hormuz - the only passage from the Persian Gulf into the open ocean.

Osborn previously served at the Pentagon as a Highly Qualified Expert with the Office of the Assistant Secretary of the Army - Acquisition, Logistics& Technology. Osborn has also worked as an anchor and on-air military specialist at national TV networks. He has appeared as a guest military expert on Fox News, MSNBC, The Military Channel and The History Channel. He also has a Master's Degree in Comparative Literature from Columbia University. This article first appeared last year.