Could Israel Make Good Use of the F-22 Raptor? 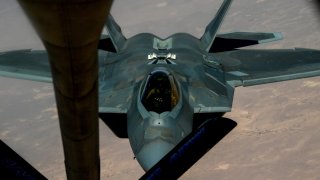 Here's What You Need to Remember: For now, it seems likely the Israeli Air Force will have to “make do” with its F-35I Adir aircraft, which by some accounts is the best fighter in the skies today. It is the only F-35 variant to enter service heavily tailored to a foreign country’s specifications.

Even before Joe Biden became president-elect, it looked quite unlikely that Israel would be acquiring any Lockheed Martin F-22 Raptor fighters. News had circulated that the Israeli military had expressed interest in the F-22 as the advanced stealth aircraft could allow its air force to maintain its “qualitative military edge” (QME), which the United States is legally required to preserve. This followed the agreement by the United States to sell the Lockheed Martin F-35 Lightning II to the United Arab Emirates.

The story, which was first reported by the London-based Asharq Al-Awsat, cited internal sources that senior Israeli defense officials sought to acquire the F-22 as it was designed for greater air-to-air combat capability than the F-35.

A significant issue is that the F-22 cannot be exported under U.S. federal law, which is meant to protect its stealth technology and other classified technologies. While a 2010 defense authorization bill did include a provision that required the Department of Defense (DoD) to prepare a report on the costs and feasibility for the export of an F-22 variant, Congress has not lifted the export ban.

However, the biggest issue is that the F-22 program ended in 2011. To date, only 195 aircraft have been produced and it is unlikely that production would resume due to the high cost.

Defence-Blog reported that Israeli defense officials have only denied reports that there was interest in the fighter, and said it is “not currently on the table.” However, there have been the arguments made that as President Donald Trump is likely a lame duck he could approve the sale.

That of course doesn’t really make it true—or more importantly address the feasibility issues, notably that the aircraft isn’t being produced. Restarting the program would likely be astronomically costly to say the least, while another issue is that the aircraft in service are largely considered overdue for an upgrade.

“These reports are based on an assessment that Trump is willing to do almost anything—including diplomatic and security intervention—in order to promote arms deals and to help friends,” Yossi Melman, intelligence and strategic affairs correspondent at the Haaretz newspaper, reported.

For now, it seems likely the Israeli Air Force will have to “make do” with its F-35I Adir aircraft, which by some accounts is the best fighter in the skies today. It is the only F-35 variant to enter service heavily tailored to a foreign country’s specifications.

The Israeli fighters feature an overriding Israeli-built C4 program that runs “on top” of Lockheed’s operating system. One of F-35’s key capabilities comes from its superior ability to soak up data with its sensors and share it with friendly forces. Compatibility with datalinks used by friendly Israeli air and ground forces is thus an important aspect from Israel’s perspective as it tracks the position of hostile surface-to-surface rocket launchers and surface-to-air missiles systems.

The Adir has also been certified to carry major Israeli-developed weapons systems in its internal weapons bay. This includes the Python-5 short-range heat-seeking air-to-air missile, and the Spice family of glide bombs, which combine electro-optical, satellite, and man-in-the-loop guidance options that offer greater targeting versatility and have a range of up to sixty miles.

Peter Suciu is a Michigan-based writer who has contributed to more than four dozen magazines, newspapers and websites. He is the author of several books on military headgear including A Gallery of Military Headdress, which is available on Amazon.com. This article first appeared two months ago and is being republished due to reader interest.