Could Italy and Spain's Coronavirus Crisis Cause a European Banking Meltdown? 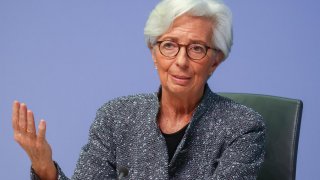 If there is one chart that underlines the difficult challenges now posed to the Eurozone by the COVID-19 pandemic, it is that of the growing imbalances in the European Central Bank’s (ECB) Target 2 settlement account. That chart shows that Germany now has a Target 2 credit balance exceeding EUR 1 trillion, which corresponds to a combined Italian and Spanish Target 2 debtor position of roughly the same amount. Troubling as this imbalance already is, there is every prospect that it will now widen substantially in the wake of the COVID-19 pandemic. That in turn is bound to give political ammunition to Germany’s Eurosceptics.

The ECB’s Target 2 account is its settlement system of transfers between the Eurozone member countries’ central banks. Individual central banks’ cumulative balances in that account are the result of accumulated net cross-border financial flows. In principle, those latter flows can be the result of trade-related payments. However, since the 2010 Eurozone debt crisis they mainly have been the result of capital account related flows.

Italy and Spain’s tourist dependent economies have been the hardest hit by the COVID-19 pandemic, with the IMF now forecasting that these two economies will contract by around 12.5 percent in 2020. That is bound to give renewed impetus to capital outflows out of those two countries.

It will do so as fundamental questions are raised about those two countries’ public debt sustainability in the wake of deep economic recessions and ballooning budget deficits. It will also do so as questions arise about the ability of the weak Italian and Spanish banking systems to withstand a sharp increase in non-performing loans.

If capital outflows from Italy and Spain were to increase, so too would their large Target 2 debtor position in the ECB. As a counterpart, one also must expect that there would be a corresponding increase in the cumulative creditor position of the Eurozone’s stronger member countries like Germany, the Netherlands, Austria, and Finland. This could be politically problematic — especially in Germany if its creditor position were to soar past that country’s current EUR 1 trillion balance, which already amounts to around 25 percent of Germany’s GDP.

Those who hold the view that the Target 2 imbalances should not be a cause for concern argue that, as long as the Euro holds together, these balances do not need to be settled. True as that statement might be, it overlooks the losses to which the Target 2 creditor countries are exposing themselves in the event that a country were to leave the Eurozone or, worse yet, if the Eurozone were to break up.

In the event that a country were to leave the Eurozone, it would be required to settle its Target 2 balance. However, if it had a solvency problem and was not able to settle its creditor balance, those losses would be shared by the Eurozone’s remaining countries in direct relation to their share in the ECB’s capital key. For a country like Germany, this could mean that it would have to absorb a loss of some 25 percent of Italy and Spain’s creditor balance.

Earlier this year, the German Constitutional Court raised serious questions about the legality of the ECB’s bond buying program. It did so even before the ECB indicated that it might now be buying a greater proportion of some countries’ government bonds (read Italian and Spanish government bonds) than their share in the ECB’s capital key. One would think that the last thing that a German government wishing to calm rising anti-ECB sentiment at home now needs is to have the country’s Target 2 creditor position soar beyond the sensitive EUR 1 trillion mark. However, given the dire state and poor public finances of both the Italian and Spanish economies, it is difficult to see how that will not happen.

This article by Desmond Lachman and John Kearns first appeared in AEIdeas on August 20, 2020.