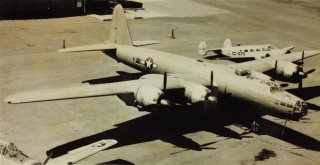 Here's What You Need to Remember: The aircraft could have been a threat to the U.S. Navy's fleet earlier in the war, but in 1945 the bombers would have had a hard time getting past the vast air net that protected the American carriers and other warships. Without a forward base, any hopes of striking the United States were also a pipedream.

Armchair historians as well as studied academics continue to debate why Nazi Germany failed to develop a long-range bomber before the outbreak of the Second World War. The United States, Great Britain and even the Soviet Union all developed long-range heavy bombers, but the Axis powers failed to develop similar aircraft. The German efforts included the He-177, a twin-engine bomber that earned infamous nicknames such as the "Flaming Coffin;" while the BF 110 medium bomber had the range but was unable to fend off enemy fighters.

Germany instead put much of its efforts into jet aircraft, while the efforts to develop a long-range bomber bordered on the fantastical. That included the Messerschmitt Me 265, which was part of the Amerikabomber program. The idea of the strategic bomber was one that could strike New York City from bases in France or the Azores. While three prototypes were built, production was abandoned in the fall of 1944.

The Imperial Japanese Navy also developed a four-engine long-range bomber – but as with many of the "miracle weapons" produced by the Axis powers, it proved to be too little, too late.

The Nakajima G8N Renzan – originally designated Type 18 experimental land-based attack aircraft – was developed by the Nakajima Aircraft Company, which had developed the KI-43 fighter plane as well as the Kokoku Heiki No. 2, or Kikka ("orange blossom"), a jet aircraft similar in design to the German Me-262.

The Renzan ("Deep Mountain") met the demands for a long-range bomber, and it had a maximum speed of 320 knots (370 mph) and was able to carry a bomb load of 8,800 pounds some 2,300 miles. In addition, it could carry a reduced bomb load up to 4,600 miles. Compared to other Japanese aircraft, which were largely antiquated by the latter stages of the Second World War, the Renzan was modern, with tricycle landing gear and a large single-fin rudder.

The bomber was powered by four 2,000 horsepower Nakajima NK9K-L "Homare" 24 radical engines with Hitachi 92 turbosuperchargers and four-bladed propellers. Its armament included twin 20mm Type 99 cannons in power-operated dorsal, ventral and tail turrets, two 13mm Type 2 machine guns in power-operated nose turret and one flexible 13mm Type 2 machine gun in each of the port and starboard beam positions. The aircraft was crewed by three but carry as many as 42 passengers. To man the machine guns the Renzan had a crew of 10.

As noted the Renzan simply arrived too late to make any contribution to the war effort. The aircraft made its first flight in late October 1944 and the Imperial Japanese Navy had planned to have 48 assembled by September 1945, but only a total of four were built by the time Japan surrendered in August 1945. Even if the Japanese military had built 48 or even 100 for that matter the aircraft likely could have done little to turn the tide.

The aircraft could have been a threat to the U.S. Navy's fleet earlier in the war, but in 1945 the bombers would have had a hard time getting past the vast air net that protected the American carriers and other warships. Without a forward base, any hopes of striking the United States were also a pipedream.

One of the four prototypes was taken to the United States for testing, but it was scrapped. For so many reasons the Nakajima G8N Renzan remains little more than a curiosity of the war.