Could Jetpacks Play a Role in Future Military Campaigns? 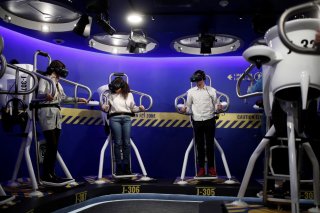 Here's What You Need to Remember: Jetpack Aviation has reached a deal to provide its JB-12 jetpacks, to “an unspecified Southeast Asian military.” The company told the site that it has sold two of the jetpacks to that military for $800,000.

When Jetpack Aviation, the Southern California-based company that makes actual jetpacks, has been in the news in the past year, it has mostly been in relation to the mystery of the Jetpack Man. Those were the repeated sightings of what appears to be a man in a jetpack, flying over the Los Angeles area, usually near Los Angeles International Airport.

Jetpack Aviation has said that they don’t believe that the “Jetpack Man” has anything to do with them or their technology, with its founder saying in a TV interview that he believes the “Jetpack Man” is neither a jetpack nor a man, but rather likely a drone that is meant to look like a man with a jetpack.

However, Jetpack Aviation is now in the news for something completely unrelated.

The Drive reported this week that Jetpack Aviation has reached a deal to provide its JB-12 jetpacks, to “an unspecified Southeast Asian military.” The company told the site that it has sold two of the jetpacks to that military for $800,000.

The JB-12 is an update of the company’s previous model, the JB-11. The new model, unlike the old, is “specifically intended for military use.”

“The company does say that the JB12 weighs approximately 105 pounds, though it's unclear if this is an empty weight or with a full load of fuel, either kerosene or diesel. It is powered by six turbojet engines is capable of hitting a speed of around 120 miles per hour,” per the Drive. The JB-11 was heavier, with an empty weight of 115 pounds.

“The ratification of this deal demonstrates that the JB12 JetPack provides defense forces with exceptional aerial capabilities to fulfill a wide array of mission requirements. The maneuverability of the JetPack, its small form factor, which fits inside a set of standard Pelican cases, and ease of integration with our Speeder platform to complement the JB12’s capabilities, were all factors that informed the sale,” David Mayman, the company’s founder and CEO, said in the press release. “This order represents a significant step forward for us as it confirms that our development program is meeting military needs.”

The “Jetpack Man” was most recently sighted, once again in Los Angeles, in early August. Several pilots at LAX said they saw the familiar sight at the airport, about a year after his last appearance.

A Boeing 747 pilot reported seeing an object that might have resembled a jet pack 15 miles east of LAX at 5,000 feet altitude,” an FAA spokesman told Los Angeles’ ABC 7 at the time. “Out of an abundance of caution, air traffic controllers alerted other pilots in the vicinity.”