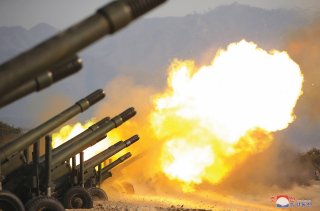 Here's What You Need to Remember: By ineffectively countering the canard about the damage North Korea can inflict on Seoul through conventional fire power, the United States and its allies have allowed public support to be swayed by erroneous considerations. Additionally, U.S. officials have devalued the importance of public support during a period of confrontation that has also fanned an avoidable ambience of fear.

The year 2017 marked a highpoint in U.S.-North Korean tensions with the United States continuing to maintain that the military option was still on the table. Though nuclear threats have also been exchanged, one of the oft-quoted retaliatory capability of North Korea has been its ability to devastate Seoul within a day by applying its conventional artillery fire power. This has been a powerful argument that supposedly adds to deterring the United States from military action. We contend that such an argument is misplaced and fallacious, and it doesn’t withstand tactical and technical scrutiny. We also believe that in a situation of a nuclear overhang, military options are challenged by unacceptable risks.

Way back in 2003, Time magazine reported that North Korean Artillery could flatten Seoul in the first half hour of any confrontation. A South Korean security analyst suggested that North Korean artillery pieces of calibers 170 millimeter and 240 millimeter “could fire 10,000 rounds per minute to Seoul and its environs.” There are many other such analyses and reports (before and after) that have reinforced and complemented this canard. The hype that has been created is now an amoebic prophecy which feeds on itself. It dominates the national thinking of South Korea and has created a fear psychosis. Attempts to argue otherwise or question this canard have lacked depth and are not conclusive. Hence, the canard has assumed delusional proportions. We have carried out an analysis to examine if North Korea can flatten Seoul with conventional artillery in any confrontation. We have given the best to North Korea. The benefit of any doubt was given to the team which argued that North Korean artillery can flatten Seoul. Our emphatic answer is: it cannot. This article is about logically proving that North Korean artillery can never flatten Seoul—leave alone in the first half hour of any conflict.

The Korean People’s Army ground force has about twelve thousand pieces of tube artillery and 2,300 pieces of multiple-launch rocket launchers (or more). The country sets store by its huge arsenal of conventional artillery. However, Seoul is about forty kilometers from the DMZ. Only three weapon systems have a range that can reach Seoul from North of the DMZ. An analysis of the effectiveness of these weapons has been carried out using figures from open sources and planning data that other armies with similar weapon systems have used to arrive at some basic conclusions.

There are reportedly five hundred guns (125 batteries of four guns each) deployed within the range of Seoul. Hence, a total of twelve thousand rounds can be fired. If the firing is not interfered with, then the lethal area works out to about 7,857 square meters per shell. That gives a coverage of about ninety-five square kilometers. That is if all guns are aimed at different points and spaced out and do not overlap each other at the target end in a grid pattern. However, guns are deployed in batteries of four to six guns, which fire together. Hence, lethal areas will overlap. The total lethal area after one hour of uninterrupted firing could be, at best, forty to fifty square kilometers.

The 240 millimeter MBRL has a range of sixty kilometers. An improved version reportedly has a range of seventy kilometers. It has twelve tubes. It is believed that two hundred launchers are aimed at Seoul (thirty-four batteries of six launchers approx.). A max of 2400 rockets can be fired in one salvo. A Battery of 240 millimeter rockets (seventy-two rockets) can normally neutralize 1000 x 800 meters in one salvo. Hence thirty-four batteries can cover about twenty-seven square kilometers with one salvo. After that, the batteries must scoot, reload from secure positions in depth, relocate, and be ready to refire from another location. That is a minimum of a four to five hour tactical cycle under battle conditions. Hence, after the first salvo, this equipment cannot be used for another engagement of Seoul until the next four to five hours. In that period, it will suffer attrition since its signature is huge and it will be open to retaliation from South Korean air and artillery. Moving and redeploying during the day will be a very risky affair. But that will be a command decision by the North Koreans.

This weapon is like the Russian Smerch MBRL. It has eight tubes with a maximum range of two hundred kilometers. Since no details are available, we have assumed that eight regiments (ninety-six) launchers are deployed against Seoul, for this analysis. Incidentally, this is a pretty high figure. Notwithstanding, given the enhanced lethality of this rocket, it has been assumed that the area covered by ninety-six launchers is the same as the two hundred of the 240 millimeter rocket i.e. twenty-seven square kilometers. In our estimate the time between one engagement and the other will be about four to five hours, like in the case of the 240 millimeter MBRL. Hence, even in this case only one effective salvo can be fired on Seoul.

The Coverage of Artillery Deployed Against Seoul

The net lethal area covered by the artillery deployed against Seoul works out to approximately one hundred square kilometers after one hour of uninterrupted firing. In comparison, Seoul has an area of 605 square kilometers. Hence, in one hour of firing North Korean artillery would have actually covered only 1/6 of the area of Seoul and not flattened the city. In fact, many areas of the city will be untouched.

Even in this one hundred square kilometers, what will be the level of damage? That is a question which needs answering. Of course, there will be some damage when such volumes of fire are brought down on a target in a planned and organized manner. However, certain factors need to be considered.

The lethality figures and distances given above are for neutralizing tactical targets which are not hardened. To destroy hardened targets, the requirement of ammunition will be at least five to six times more. So much for flattening Seoul!

The efficacy of artillery fire is very often dependent on the quality of target acquisition and analysis. Target acquisition at such great depths is a very difficult process. It involves multiple methods to obtain targets accurately. Hence. a qualitative issue comes to fore. Not all targets will be hit. Random firing will not produce results. Only well directed artillery will produce results. It is doubtful if that is feasible in this case.

Effect on Hard and Concrete Structures

Hard concrete structures won’t collapse and flatten out with the volume of artillery firing the North Koreans can bring to bear on the city as per our calculations. There will be open spaces in the city in which shells will fall. These will only reduce casualties and damage. The artillery that the North Koreans seem to be banking on is effective against tactical and operational targets. It must be employed surgically to remove certain high-value targets. The North Koreans might plan to do just that and destroy some specific structures in Seoul. That will mean additional ammunition and effort against that target. It will contract the envisaged widespread damage or “flattening” effect.

An important factor is availability of ammunition. It limits North Korean ability to possess ammunition in such colossal quantities to flatten Seoul. If the country has such huge stockpiles and can maintain it at that levels years on end, then it is old ammunition. It would have degraded and, thus, its efficacy will be low. On the other hand, if it is relatively new and reliable ammunition, North Korean ammunition factories must be working big time to keep producing the quantities required. Can an impoverished country afford to keep producing ammunition in huge quantities to replace older ammunition? After all, artillery ammunition cannot be recycled. It can only be destroyed.