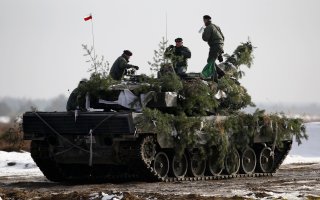 Various modernizations to the PT-91 fleet have been proposed to make them more competitive, including replacement of the main gun with an autoloaded Ukrainian L/50 KMB-2 120-millimeter cannon or Slovak 2A46MS 125-millimeter cannon, additional armor arrays, new more powerful engines, APUs and better optics. These updates are not being pursued in any official capacity yet, as they would be rather expensive for relatively little gain in combat efficiency.

In the end, the only tank in the Polish fleet right now that could attempt to fight Russia’s best is their fleet of Leopard 2A5s. Even then, with the ammo produced it is a stretch to say that they would be able to effectively engage head-on. PT-91s could prove to be an effective second-line tank, however. Their primitive fire control system and armor limit their ability to fight on the move. Russian tank superiority could be offset by the heavy use of Spike missiles on the defensive by Poland. The Leopard 2PL along with acquiring additional stocks of surplus 2A4s to modernize to that standard could prove to be the bulwark of a new Polish tank fleet, but that modernization is not yet formalized.