Could a South Korean Aircraft Carrier Scare Kim to Sue for Peace? 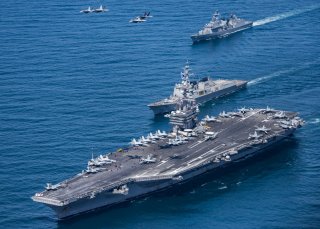 Here's What You Need to Remember: An aircraft carrier would more significantly increase South Korea’s ability to contribute to regional security alliances or multi-national expeditions, both symbolically and materially. Thus, though CVX may not be the most combat efficient use of South Korean defense dollars, Seoul may hope it brings new options to the table and enhances South Korea’s prestige and regional clout.

Carrier aviation has seen a renaissance of sorts among Washington’s military allies due in large part to the advent of the F-35B stealth jump jet, which can operate from affordable amphibious carriers.

Nowhere is that trend more curious or controversial than South Korea, a country one would expect to have little use for a carrier given that its primary military threat, North Korea, lies well within the range of its land-based combat aircraft. In fact, Seoul appears motivated by a desire to compete with new carriers being deployed by Japan and China.

Seoul announced it would build an aircraft carrier in July 2019 after years of study. The ship would be paired with a $2.7 billion order for twenty F-35B Lightning stealth jump-jet fighters, complementing sixty land-based F-35As. The B model combines the jet’s stealth and sensor capabilities with vertical lift fans allowing the jet to perform short-takeoff and vertical landings.

Both concepts presented at MADEX are pegged at displacing forty-five thousand tons at full load, over twice the full load mass of a Dokdo, and features two instead of the usual one raised superstructures, or “islands.”

DSME is partnering with Italian shipbuilder Fincantieri, which has already built several carriers, including the F-35B-compatible Trieste for the Italian Navy. That’s important because South Korea reportedly has had difficulty obtaining specs for how to heat-proof its decks against the F-35B jet’s exhaust. The partnership thus brings valuable expertise in both specific and general terms.

DSME’s box-shaped design—spanning 862 feet long, 152 feet wide and displacing 38,000 tons empty—hews closely to South Korean Navy concept images for an expanded amphibious assault ship. Sixteen F-35Bs can fit on the deck, with twelve more stored in the hangar accessed via two elevators on the starboard side. The deck also has nine spots for helicopters.

Hyundai’s design, by contrast, is longer at 885 feet, and nearly 33 percent wider than the DSME proposal at 197 feet—but masses only around 30,000 tons empty. It also takes cues from the UK’s bigger Queen Elizabeth-class carrier by integrating a ski-jump ramp which assists aircraft in executing short takeoff runs.

While the F-35B jet doesn’t need the ski jump, the ramp theoretically allows for safer takeoffs with heavier fuel and weapons loads, and (HHI claims) increased sortie generation. Implicitly the ski ramp, if combined with arrestor gear, could later enable operations from non-vertical takeoff aircraft, such as a naval variant of Korea’s forthcoming KF-21 jet fighter or larger carrier-based drones. Supposedly, the ramp can be easily removed if the carrier ever is converted to a catapult-launch configuration.

The HHI concept has deck space for sixteen F-35 jets on deck and eight more in its hangar, as well as six-deck spots for helicopters. Elevators on opposite sides of the carrier provide access to the hangar. The design also features a well-deck on the stern for launching unmanned ships (USVs) and drone submarines (UUVs), which presumably could assist in detecting North Korean mines and submarines, and a stern-mounted platform for launching and recovering vertical-takeoff drones.

In terms of architecture, the concept also features a wave-cutting bow and additional horizontal thrusters to compensate for the lower maneuverability of wider ships. The HHI carrier’s two islands are shaped for radar stealth, which might reduce the range the carrier can be detected and targeted for attack. But on the flip side, the phased array radar panels situated under the bridge, while allowing better visibility for the crew, may reduce the range and detection angles of the carrier’s primary sensor.

Still, the ROK Navy may decide to eschew a jump-jet carrier and seek a design that can operate higher-performing non-jump jet fighters. Graphics produced by the navy indicate it is still doodling concepts for catapult-equipped carriers. But for now, it seems the plan is to start with a jump jet carrier before attempting a higher-performance concept.

HHI and DSME have provided the ROKN with clearly contrasting choices.

Hyundai’s design seems likely to be more expensive to build and operate, but the ski jump may enable improved performance from embarked F-35B jets. But DSME/Fincantieri’s design can carry more aircraft in total. While DSME’s carrier has defenses against unmanned systems, HHI’s features special facilities for aerial- and sea-based drones. The HHI carrier appears to be stealthier, while the radar on DSME’s seemingly has a better vantage. Lastly, HHI’s concept has more evolutionary potential to support different types of aircraft—but won’t benefit from the carrier-building insight provided by Fincantieri to DSME.

A contract will be awarded late 2021 or 2022, with construction beginning three years later. Overall, DSME’s design is probably favored because it adheres more closely to ROK Navy requirements and has a lower risk of cost overruns and technical delays. However, the Navy’s choice is not a foregone conclusion, as there remains the possibility the service will be enticed by HHI’s more expansive vision.

But Why Does Seoul Want an Aircraft Carrier?

South Korea’s land-based warplanes and missiles are already easily within range of target throughout North Korea, Seoul’s chief military threat. And land-based jets can generate more sorties than jump-jets on a carrier.

Still, a carrier could offer moderate benefits by making it easier for jets and even helicopters laden with commandos to penetrate North Korean airspace from a coastal vector. They could also serve as air defense, drone and command-and-control hubs.

Carrier-based jets may also be less vulnerable to North Korean ballistic missile attacks—though a carrier, unlike an airbase, can be sunk, and thus will require a powerful escort to protect against North Korea’s many submarines, mines and small boats armed with anti-ship missiles.

Overall, the Korean carrier program appears more motivated by competition with the navies of Japan and China, both of which are bringing multiple carriers into service. The shift to the larger CV-X design may have been aimed at matching the heft of Japan’s forthcoming Izumo-class aircraft carriers.

An aircraft carrier would more significantly increase South Korea’s ability to contribute to regional security alliances or multi-national expeditions, both symbolically and materially. Thus, though CVX may not be the most combat efficient use of South Korean defense dollars, Seoul may hope it brings new options to the table and enhances South Korea’s prestige and regional clout.