Could a U.S. Fighter Jet Fly as Fast as the SR-71 Blackbird? 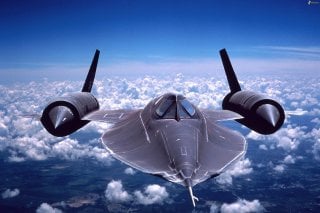 The SR-71 Blackbird is one of the most famous planes ever flown by the U.S. military. Known as the fastest plane ever, she had a run of nearly 30 years, in which case it was never once shot down. The plane is still talked about reverently decades after it stopped flying, and was even the subject of a well-received, award-winning documentary that was released a couple of years ago.

“No reconnaissance aircraft in history has operated in more hostile airspace or with such complete impunity than the SR-71 Blackbird,” one report last year stated of the plane.

One historian recently said that the Blackbird could have been modified to become a fighter plane.

According to a February report by We Are the Mighty, which cited the work of historian Joe Baugher, the same skunkworks that famously produced the Blackbird developed a plane that is called the YF-12, which included an AN/ASG-18 radar and four AIM-47 missiles.

However, it wasn’t to be. The plane even got a production order for 93 airframes. But Robert McNamara, the Vietnam-era Secretary of Defense, did not release the funds, bringing an end to the project.

“News of the the YF-12’s development was leaked in an effort to distract the public from the work being done to make a reconnaissance plane,” the We Are the Mighty report said. "But the plane – awesome as it was – would not ever see service due to the development of reliable intercontinental ballistic missiles.”

Baugher, the aviation historian, went into more detail about the project that wasn’t.

“The three YF-12As served initially with the 4786th Test Squadron at Edwards AFB. The USAF was sufficiently impressed with the performance of the YF-12A that on May 14, 1965, they ordered a total of 93 definitive F-12B aircraft into production and Congress voted $90 million toward the project,” the historian wrote.

“However, Secretary of Defense Robert McNamara saw no need for the F-12B and refused to free up the money, the reason being given that the expanding war in Southeast Asia was consuming all available funds in the USAF budget. McNamara chose instead to pursue the cheaper ‘F-106X’ interceptor. The YF-12As served primarily in various and sundry operational evaluation projects throughout the remainder of the 1960s.”

Two of the remaining planes were handed to NASA, although one was lost in a June 1971 accident in which two Air Force pilots ejected. Another was donated to the USAF Museum at Wright Patterson AFB in Ohio, and is the only surviving  YF-12A in existence.