COVID Crisis in India: Why Its Public Health Strategy Failed 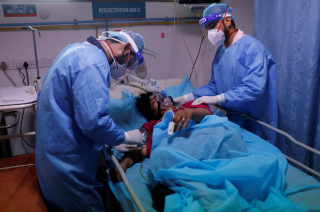 Most countries have used what’s known as the Swiss cheese model in planning their COVID response. In this risk-management model, each preventative measure is represented by a slice of cheese. No slice on its own can stop the virus from spreading because it has holes (flaws). But many slices, stacked one in front of the other, are enough to stop the contagion. In India – to continue the analogy – some of the holes were too big in three of the most important layers.

The first layer (as shown in the diagram below) is physical distancing – a tall order for India. India’s cities are densely populated and made denser by the daily arrival of millions of migrant workers who do most of the menial work.

The second layer is the proper use of masks and enhanced sanitation. This was always expected to be unreliable because of India’s low literacy rates and patchy social compliance. Excruciatingly hot weather in parts of the country, which can get to 48℃-50℃ in peak summer, doesn’t help either.

The final layer is mass vaccination. This measure has been severely dented from the beginning. High rates of vaccine hesitancy and, more recently, vaccine shortage are to blame. India has partially or fully vaccinated just 12% of its population. The challenge of vaccinating the vast majority of people in such a large, populous and demographically complex country was always going to be difficult.

During the first wave, India’s lockdown was one of the strictest in the world. And the stigma of dying from a new unknown disease encouraged people to wear masks. So two of the three primary layers of protection mentioned above, worked well to protect India from widespread infection.

In the second wave, however, the prolonged and harmonious failure of all the three basic layers resulted in a catastrophic blow to India’s already busy infectious disease landscape and strained healthcare system.

A study known as a serosurvey, conducted in February 2021 in New Delhi, showed that over 56% of the population had antibodies to the coronavirus. This number could have only increased in the months that followed. However, it’s not clear if the antibodies are as effective against the new circulating variants.

Too relaxed by far

With other contributors, such as the government’s relaxation of restrictions on holding religious gatherings, election rallies, sporting events (until just before the new surge) and social and festive celebrations, it is not surprising that the COVID response layers were torn apart by this highly opportunistic virus, causing the devastation we are seeing today.

India is now reporting the highest number of cases in the world, with over 1 million recorded every three days. This has put an enormous strain on the mostly privately run diagnostic industry. The diagnoses that used to be made available in less than 24 hours are now taking up to five days in some cases.

This has resulted in several patients dying without even considering a trip to the hospital. And those lucky enough to get to a hospital are fairly sick by that point, making recovery all the harder, or already on the mend and don’t need to be in hospital.

This crisis in India reminds us how an out-of-control public health situation and healthcare infrastructure failure can lead to a much higher mortality rate than would otherwise be the case. It is an important lesson for every country that healthcare systems should be prepared, poised for another potential surge, until we are all safe as one world.