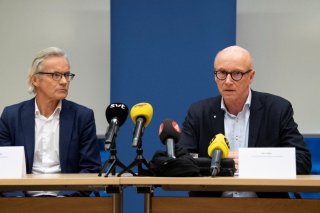 Officials in Halmstad municipality, Sweden, recently forced a teacher to remove their mask and prohibited the use of masks and all forms of PPE in schools. The municipality said there was no scientific evidence for wearing masks, citing the Swedish public health agency. At the time, agency guidance stated that there were “great risks” that masks would be used incorrectly. This guidance has since been removed.

To someone unfamiliar with the Swedish response to COVID-19, this mask ban might sound shocking. After all, while masks are not foolproof, there is evidence that indicates that they do help reduce the spread of COVID-19, especially in situations where maintaining distance is impossible – such as schools.

The municipality eventually backed down. But new examples of mask bans keep popping up in Sweden. Librarians in the affluent town of Kungsbacka, for example, have been instructed not to wear masks.

How on earth did we end up in this situation? Well, everything the Halmstad and Kungsbacka officials have said about masks is in line with the Swedish public health agency’s statements. These local mask bans are a logical product of nine months of consistent anti-mask statements by the Swedish state, which we argue is an example of poor risk communication.

Outside of Sweden, most Europeans are now used to wearing masks indoors whether in the supermarket, on public transport or when visiting the doctor. It has become such an ingrained habit that we can easily forget that, for the first months of the COVID-19 pandemic, many of us were not wearing masks at all. In those early days, the main message was the rather simple “wash your hands” and the rather more difficult “don’t touch your face”.

The European Centre for Disease Control first recommended the public use of masks as early as April, though it was not until June that the World Health Organization (WHO) followed suit. England waited until July, and finally in August, Norway, Denmark and Finland brought in masks requirements.

Sweden, as we have seen, chose a different path. The Swedish public health agency has consistently stated that masks are ineffective and that their use could actually increase the spread of COVID-19 – a common view at the beginning of the pandemic but a rare one now.

In July, the health minister, Lena Hallengren, explained that the Swedish government did not have a culture or tradition of making decisions about protective clothing such as masks, and that her government would not overrule the public health agency.

Sweden’s mask policy even went beyond its national borders, into international anti-mask activism. In April, the country’s chief epidemiologist, Anders Tegnell, wrote an email to the European Centre for Disease Control (which happens to be based in Stockholm), warning it not to recommend the use of masks. The reasoning was that this “implies the spread is airborne”, which would “seriously harm further communication and trust”.

How did we get here? Back in spring 2020, when SARS-CoV-2 was still a new and poorly understood virus, the Swedish communication around COVID-19 was a simple and consistent tripartite mantra: wash your hands, keep distance, stay home if you are sick. This will be familiar to people in many other countries, and is a textbook example of effective risk communication, which should be clear, straightforward and easy to act upon.

The WHO guidelines for effective risk communication in public health crises emphasise that uncertainties should be explicitly stated, that the information is consistent and easy to understand, and that the messaging contains specific and realistic recommended actions.

The initial stages of Swedish risk communication ticked two of these boxes, while failing to communicate uncertainty, which was the case in many countries which also chose very simple messages.

As scientific understanding of the virus developed, however, the Swedish risk communication around masks did not change. In August, for example, when mask-wearing was becoming widespread in other European countries, Tegnell said that the evidence for mask-wearing was “astonishingly weak” and that their use could increase the spread of the virus.

Swedish authorities maintained their anti-mask position until December, when the prime minister, Stefan Lofven, announced a U-turn on the use of masks on public transport.

But Lofven’s new policy was not a simple rule to wear masks when travelling. Instead, it recommends the use of masks from 7am to 9am and 4pm to 6pm, for those born “in 2004 and before” who do not have a reserved seat. If this sounds overly complicated, that’s because it is.

It is perhaps unsurprising, then, that compliance has been low, with only half of commuters actually wearing masks during rush hour.

And it’s not just the general public. Two weeks after the recommendation was introduced, the director of Sweden’s public health agency, Johan Carlson, was spotted without a mask on a bus during rush hour. When asked about his failure to comply with his own recommendations, he said, “I simply failed to notice that the time had become commuting time,” which nicely illustrates the problem with overly complex risk communication.

If the head of the public health agency is incapable of following his own rules, one can hardly blame the public for their lack of compliance.

At the start of the pandemic, the Swedish government’s initial risk communication (the tripartite mantra) was straightforward and easy to understand. But by December, authorities had been warning of the risks of mask-wearing for months. So the public transport announcement was not only confusing due to its complexity but also due to the fact that its content directly contradicts the mask guidance from March until December.

In this context, it’s no wonder that libraries and schools in Sweden are sending mixed messages about whether people should wear masks.

It’s the product of months of bad risk communication on a simple public health measure that has been widely adopted elsewhere. This failure to communicate could have very worrying results: potentially increased infection in a country which is on the brink of a third wave.