Crewless Warships? DARPA Has an Novel Idea to Grow the U.S. Navy 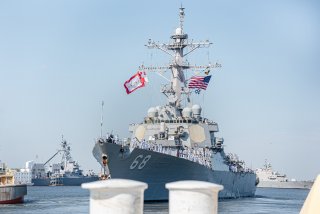 Here's What You Need to Remember: In theory, a ship without crew quarters should be able to pack more weapons, sensors and other systems in a given hull size than a manned vessel. This either means a crewless ship will pack more capabilities than an equivalent-sized manned counterpart, or more likely, a crewless ship will simply be smaller but equal in capabilities to conventional ships.

In other words, how do systems aboard a Navy ship – such as navigations, sensors and perhaps even weapons – fix themselves without a crew to help?