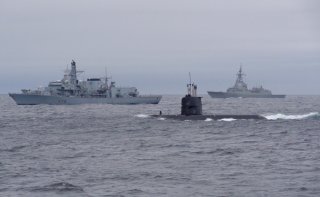 Here's What You Need to Remember: ​The Swedish navy, while small, has long reserved funds for submarines given its location and the likely direction of conflict.

In terms of modern diesel-electric submarines, it’s hard to beat Sweden. In 2005, one of them — the 200-foot-long HMS Gotland — sneaked up and virtually destroyed the American Nimitz-class carrier USS Ronald Reagan in a simulated war game. That was due in part to the ultra-quiet Stirling engines that power the Gotland.

The Swedish navy, while small, has long reserved funds for submarines given its location and the likely direction of conflict.

There are many places along the Swedish coast for stealthy submarines to hide, and they would likely face Russian vessels — the kind that may try to assist in a Russian attack on Sweden, remote as it seems. The Swedish boats’ unique Stirling engines, using Air-Independent Propulsion, gives Gotland– and Sodermanland-class subs an advantage compared to most navies operating conventional diesel-engine submarines.

But Sweden at one point considered nuclear submarines. The idea never left the drawing board, but had it, the vessel would have been rather unsafe for the crew — and possibly anyone else who happened to stray too close to the submarine when the reactor was active.

With design work beginning in 1957, the proposed nuclear submarine — called the A-11A — was also small even by the standards of most submarines at 159 feet long, and contained some interesting design features such as a large hull-mounted hydroplanes, according to a detailed summary by Fredrik Granholm and submarine historian and illustrator H. I. Sutton.

The A-11A’s initial design had six torpedo tubes in a rotating launcher — firing two at a time like a double-barreled revolver — which could not reload. That was a limitation, but the design saved on space since there was no torpedo room.

One of the most remarkable features was the nuclear reactor shielding, or rather an insufficient amount of it, according to Sutton. “The sides of the reactor compartment were minimally protected meaning that the reactor could not safely be operated in port,” Sutton wrote. “Therefore a diesel generator would be used for maneuvering in port.”

Nor would you want to hang around too long in the aft engine room, near the reactor — three and a half hours at most before hazardous radiation exposure.

In any case, no sailor ever spent any time in this bizarre nuclear mini-sub, as Sweden canceled the project in 1962. Truth be told, there wasn’t much of a practical use for a small nuclear-powered Swedish submarine, and the design came at an anomalous, odd period in history anyways. In the 1950s, there was a veritable nuclear mania when the world’s powers imagined a future of nuclear-powered cars, trucks, airplanes — and tiny reactors for the domestic home.

Those concepts didn’t pan out, and by the early 1960s, the hazards of nuclear energy for military use were becoming more apparent. Sweden shifted to its diesel-powered, AIP-augmented conventional submarines — although the A-11A’s design had an influence on these later hunter-killers. However, the neutral country’s nuclear experiments didn’t end. By the 1970s, Sweden’s civilian nuclear power plants were up and running.